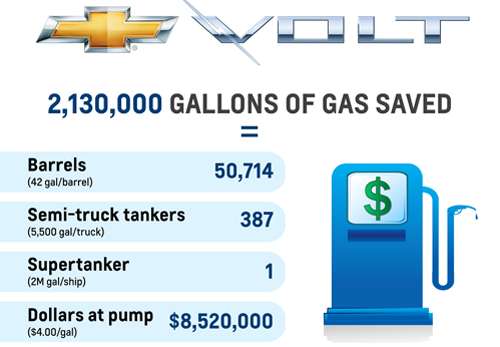 How Much Fuel Chevrolet Volt Has Saved Since its Inception

Chevrolet is hyping the fact that its Volt has managed to save – literally - a boatload, make that a super tanker boatload, of gas since its inception.
Advertisement

According to an announcement from the company, Chevrolet Volt owners collectively have saved a supertanker of gasoline since the electric car with extended range went on sale, compiling 40 million miles on electricity and avoiding the use of more than 2.1 million gallons of gasoline.

Here are some facts on super tankers, according to the Worsley School website

• Among tanker ships, the very largest are called supertankers.
• The largest of these are the Very Large Crude Carrier (VLCC), which can carry 200,000 tons or more of oil
• The Ultra Large Crude Carrier (ULCC) can manage over 300,000 tons.
• These ships can weigh 200,000 to 400,000 tons all by themselves. The top speed of a supertanker when carrying a full load can be as much as 18 mph
• VLCCs are so big that their load of crude oil, held in several cavernous tanks each the size of a cathedral, could meet the energy needs of a small city for a year. Three supertankers can carry all of the oil used by Japan in a day.
• VLCCs are more than 300 meters in length, (almost a quarter of a mile).
• They are as long as the world's tallest buildings are high.
• They're also half a football field wide.

Chevrolet recently introduced a rolling ticker on its website that showcases real-time daily driving statistics for Volt owners based on OnStar data. Results in total number of miles driven, electric miles driven and gallons of gas saved are viewable. As of today:

OK, let's just say you could drive a Chevrolet Volt to the moon. Here's an interesting factoid courtesy of TorqueNews.com, based on Chevrolet figures. The average Volt owner would have to stop for fuel 266 times on their way to the moon. Of course, we're not rocket scientists so we don't know how much fuel would have to be burned breaching the earth's atmosphere and all that.

The Volt has a total driving range of up to 379 miles, based on EPA estimates. For the first 35 miles, the Volt can drive gas and tailpipe-emissions free using a full charge of electricity stored in its 16-kWh lithium-ion battery. When the Volt’s battery runs low, a gas-powered engine/generator seamlessly operates to extend the driving range another 344 miles on a full tank. Typically Volt owners drive an average of 900 miles between fill ups at the gas station.

No word yet on how this news about the Chevrolet Volt's fuel efficiency affects the super-carrier business.

Kirk wrote on May 17, 2012 - 5:39pm Permalink
The 35 miles is low, I average 48 miles in SoCal for my EV range
Anonymous wrote on May 19, 2012 - 9:49pm Permalink
We have had one as our company car, here in Madison, WI for one month and are averaging 46 miles per charge. I'm guessing winter will drop it a lot, but we are really impressed by this and in many other ways.
Anonymous wrote on May 19, 2012 - 9:51pm Permalink
We are averaging 46 miles per charge in our company car in Madison, WI after 1 month. We have been very impressed with the range and everything about this car. First GM product we have purchased!
Aaron Turpen wrote on May 17, 2012 - 9:44pm Permalink
Two points: 1) saved that much fuel as compared to what? What are they comparing the car to in order to say it "saved this much". 2) a Volkswagen TDI can get 700-800 miles per tank of fuel without all the expensive electrification. They sell for about half the Volt's price tag. Even after magic government incentives.
Keith Griffin wrote on May 18, 2012 - 9:38am Permalink
Compared to a similar sedan running on gas alone. I'm with you, though. The TDI makes a lot more sense but the Volt is one way to get Americans used to EVs without the range panic.
laspaled wrote on May 18, 2012 - 10:39pm Permalink
TDI still uses Foreign Oil as it's primary source of fuel. If we stop using Foreign Oil we stop having to send the military to the Middle East to "protect our interests". That's a 30 Billion Dollar a year savings right there... not to mention the 7 Billion a Year we give the Oil Companies in tax breaks and subsidies. Every dollar that goes to a Middle Eastern country for fuel is another dollar that will potentially be used to terrorize the world. Every drop of fuel from the middle east is tainted with the blood of our troops. American's need to look at the long term savings. I bought a Volt and I am NOT saving any money on a personal level... but I am not spending any more than if I had kept my previous vehicle which was getting 25 MPG. The real savings will come when we keep our young people from having to fight for the gasoline we want to put in our cars.
Aaron Turpen wrote on May 18, 2012 - 11:32pm Permalink
Correction: it's using foreign oil IF you live where foreign oil is imported to make diesel fuel. I don't happen to live where oil is imported and actually live where oil is exported FROM (along with coal, natural gas, and wind energy). Much of the U.S. actually produces its own oil or imports it from a U.S. or Canadian source, not the Middle East.
laspaled wrote on May 19, 2012 - 9:47am Permalink
Great point. I am glad others are aware of the cost of propping up the oil industry and know where their fuel comes from. I have read complaints from greenies about EV's due to the fact that the electricity may have been generated from coal but living in the west I can honestly tell them most of my power is Hydro-Electric. But they do make a good point. Most electricity is a trade off environmentally. Similarly most diesel is a trade off between great gas mileage and funding big oil.
Aaron Turpen wrote on May 19, 2012 - 2:40pm Permalink
There is no such thing as "green" or "environmentally friendly." Everything has a trade off. It's a question of what the trade is. I see little difference in funding "big oil" than in funding "big green." If the money is taken without consent (taxation) and given without representation (as is usual in D.C.), then it's theft either way.
laspaled wrote on May 20, 2012 - 2:18pm Permalink
OPEC nations no longer need to get revenue from us. If we can get Americans to reduce gasoline consumption by just 30% to 40% we can cut off OPEC here. That would be a reason not to side with Big Oil at this time. But your point is completely valid in that blindly allowing special interests to dictate our decision is simply wrong.
Aaron Turpen wrote on May 20, 2012 - 2:58pm Permalink
Except for oil's biggest user: plastics.
Nicolas Zart wrote on May 18, 2012 - 8:02pm Permalink
I think it's a brilliant marketing pitch and it moves the EV momentum in the right direction. I can only imagine how much I've saved since gas hit over $4 a gallon a few years ago and I decided to ride my bike almost every day. GM is a power house when it comes to marketing and this is a smart thing to do. Nicolas