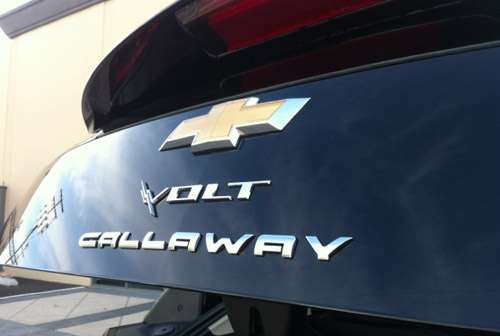 Callaway Engineering a Chevy HyperVolt and Some Good Laughs

If only the press release about Callaway Cars engineer a Callaway HyperVolt were true but alas it's not. Even though the press release leaked early on March 31, it's actually an April Fool's joke but one worth reading more about because of its targets.
Advertisement

What's interesting about the press release, though, is what Callaway chooses to skewer in its parody. Just like "A Modest Proposal" written by Jonathan Swift really wasn't about eating the children of the poor, Calloway's imagination of the HyperVolt isn't about a 10,000 volt Chevy Volt that recharges in 10 seconds.

The first target is Southern California Edison. Callaway "claims" it may partner with Callaway to bring this technology to So Cal Volt owners. The home charging stations that normally control the overnight recharging of the Volt can be modified to introduce the higher voltage.

"A pleasant consequence is that the onboard battery pack can now be charged in less than 10 seconds, however there is a dramatic drop in current for the rest of the neighborhood. The Callaways recharge " VolteMort" their personal HyperVolt, in the early morning hours to avoid neighbor anxiety," says the official press release.

Read a little further down and the press release also states, "So Cal Edison loves this project. (Local Brown Outs are a fact of life)." Sounds like Callaway is less than pleased with its Southern California utility provider.

Some of the very people that embrace the concept of the Chevy Volt also get a little good-natured ribbing in the press release. It states, "A 'next-gen' of the Callaway HyperVolt will have a different approach to onboard range extension: a thorium laser excited nuclear generator. 50 Megawatts is the current output, so to speak, allowing the HyperVolt to travel several light years before refueling. Retired GM Product Chief Bob Lutz has been asked to be the poster person."

Callaway continues: "It's about time that we start to wipe the smirks off the faces of the sniveling Global Warming Activists! We can be proud to have invented it, here, in the USA."

According to the engineers at Callaway:
• The safe duty cycle for full voltage operation is less than 1 second, but the amount of thrust generated in that one second is staggering. The tiny car literally welds itself to the roadway so as not to become traction limited.
• But to get that amount of voltage into the vehicle that quickly, Callaway had to construct conductive brushes that function just like a slot car. The brush track only needed to be about 10 feet long because the acceleration in the first second is so violent that the vehicle needs only be aimed and propelled initially.
• From that point on, it's as if it had been shot from a canon...and it's all about inertia: The car will accelerate for approximately 30 miles from that initial boosted launch, albeit in a basically straight line.

Forget range anxiety. It sounds more like clean underwear anxiety when behind the wheel of the HyperVolt.

Some other facts about this super electric vehicle:
• As the stock redline is less than 7500 rpm, Callaway felt that something like 120,000 rpm was not unreasonable. One of the intended consequences was to raise the top speed to just under 400 mph.
• Unfortunately the aerodynamics of the platform were never intended for these extremes. Callaway cautions that users should consider a BRS (ballistic recovery parachute) system similar to those used in experimental aircraft.

Sure it's all fantasy but it's still fun to read. As far as TorqueNews can determine, Callaway is the first to break the midnight EDT April Fool's Day embargo but we'll cut them a little slack. Thanks for a good laugh.

By the way, rumors the Consumer Reports bought the HyperVolt and could not start it are unsubstantiated.