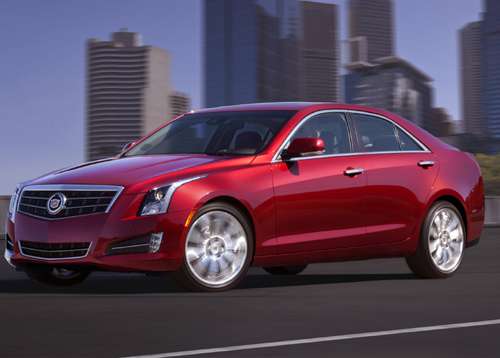 Cadillac has unveiled the 2013 Cadillac ATS Sedan one day ahead of the 2012 Detroit Auto Show and it appears to have unleashed a beast when it comes to power and weight.
Advertisement

The 2013 Cadillac ATS is the car that the Detroit automaker hopes can take on the likes of the BMW 3 series and the Mercedes-Benz C class by ultimately blowing their doors off in a straight line and through twisty roads.

Cadillac is saying the 2013 Cadillac ATS is going to come in three engine variants: two four-cylinder models and one V-6. The timid 2.5-liter, inline four-cylinder is going to be rated with fuel economy of more than 30 mpg, according to a news release made available to TorqueNews. It's rated at 200 horsepower at 6200 rpm with 188 lb. ft. of torque. Those are perfectly respectable numbers if you're buying a car for your mom but it's the other two engines that are going to pack some punch.

The optional 2.0-liter four-cylinder turbo delivers (are you sitting down?) 270 horsepower, which until recently was a stunning amount of power for a V-6 engine. As Cadillac proudly points out, "At 135 [horsepower per liter], the new 2.0T is one of the most power-dense engines in the industry, topping engines from European competitors."

What Cadillac didn't emphasize was its torque that is rated at 260 at 2400 rpm. That means a lot of grunt available without a lot of effort.

The V-6 is going to be no slouch either. It is estimated at 318 horsepower for its 3.6-liter V-6 that comes from the existing Cadillac stable. ATS will offer both manual and automatic transmission options, along with rear-wheel and all-wheel-drive configurations.

What's interesting is the launch of the Cadillac ATS was being viewed as some grand experiment in social networking because GM decided to release the news about it via a special website. Then, Cadillac kind of scooped itself and released the information to the media at 6:07 pm as if it was pulling its punches. Maybe, just maybe, it didn't want the media to get the story at the same time as the great unwashed masses after all.

The ATS has a curb weight of the somewhat vague "less than 3400 lbs.," according to Cadillac, which it deems one of the lowest in its segment. The BMW 3 series sedan weighs in at 3362 lbs., the Audi A4 at 3505 lbs., and the Mercedes-Benz C Class at 3428 lbs. There's not a significant weight difference to begin with in this class.

An aluminum hood, magnesium engine mount brackets and even lightweight, natural-fiber door trim panels contribute to the ATS’s low overall mass but Cadillac said the focus isn't solely on weight loss. An example is the cast iron differential: Engineers found they could improve fuel economy with a cast iron differential rather than a lighter aluminum version.

The ATS is offered with Cadillac CUE, a comprehensive, in-vehicle experience that merges intuitive design with auto industry-first controls and commands for information and entertainment data. As Cadillac explains, CUE, which stands for Cadillac User Experience, pairs entertainment and information data from up to 10 Bluetooth-enabled mobile devices, USBs, SD cards and MP3 players with a vehicle infotainment system that reduces complexity through customized information, voice commands and fewer buttons and larger icons. For example, most of today’s luxury cars have around 20 buttons controlling the radio and entertainment functions. CUE has only four. We applaud the concept of simplicity in car design inside or out.

LG's New EV Battery Plant Is a Welcome News for Tesla
Tesla Giga Berlin's New Hurdle: It's Not Only the Gov't, but Now Tesla Itself
END_OF_DOCUMENT_TOKEN_TO_BE_REPLACED