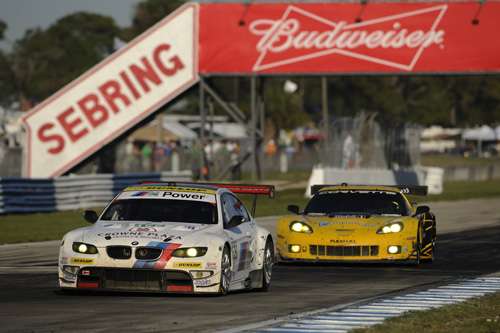 BMW Team RLL didn't have to fear a sophomore slump as it won its second straight 12 Hours of Sebring GT victory. This was the 60th running of the storied race at Sebring International Raceway in central Florida.
Advertisement

The no. 56 BMW M3 GT claimed overall victory in the GT class after 307 laps of the “Sebring International Raceway” and a dramatic final stage of the race. Over the course of the thrilling marathon, Dirk Müller (Germany), Joey Hand (U.S.) and Jonathan Summerton (U.S.) shared the driving duties. Last year, Müller and Hand (along with Andy Priaulx) crossed the line as winners in the BMW M3 GT at the season opener.

According to Autoblog, it was quite the finish. "The GT class was the one to watch, with BMWs, Porsches, Ferraris and Corvettes battling for the lead nearly the entire race. In fact, six cars jockeyed for the class lead during the second half of the race, but ultimately, Joey Hand, driving a BMW M3 GT, claimed the victory despite being pushed off the track on the last lap. A remarkable recovery and spinout by a chasing Ferrari kept him in the lead, while Corvette Racing crossed the line in second place about 6.3 seconds behind."

“This was far from easy today. We had to cope with several issues and had to pit out of sequence. Luckily the yellows saved us on a number of occasions. I have to give a lot of credit to Dunlop. We went far longer on the one set of tyres than we ever had. This victory feels really sweet. Our drivers formed a very good combination and deserved this strong result at the beginning of our 2012 campaign. All the work put in by BMW Motorsport and our team over the winter paid off,” said Bobby Rahal, team principal, in the BMW press release.

Summerton experienced a perfect debut in sports car racing by making it to the top step of the podium. With this win, a BMW M3 has now emerged victorious in the GT class of this event for the fourth time: 1997, 1998, 2011 and 2012. BMW claimed overall victory in 1975 with the BMW 3.0 CSL as well as with the BMW V12 LMR in 1999. With BMW M celebrating its 40th anniversary this year, this historic win comes as the perfect present.

In contrast to many of their competitors, the BMW drivers managed to keep out of any turmoil in the first half of the race. Their BMW M3 GT cars enabled them to clock consistent lap times, keeping in touch with the front-runners throughout the race. As the race developed, a gripping duel between BMW Team RLL and the two Chevrolet Corvettes kept the fans on their feet, all four cars only seconds apart for several hours. More than ten full-course yellows kept the GT field close until the closing stages of the contest. Only in the dying moments of the race were the BMW drivers were able to seal their second consecutive Sebring GT win. Both Hand and Jörg Müller were both victims of contact in the final minutes of the race. While Hand successfully defended his lead despite driving a heavily damaged car, Jörg Müller lost third position in the ALMS class.

Last season BMW Team RLL won the ALMS GT drivers’ championship as well as the team and manufacturer titles for the second consecutive year. Round two of the 2012 American Le Mans Series will be held at Long Beach on April 14.

Anonymous wrote on March 19, 2012 - 8:00pm Permalink
BMW ... THE ULTIMATE DRIVING MACHINE - nuff said
Mark & Travis wrote on March 21, 2012 - 10:49pm Permalink
This was a terrific event ! Sebring is a great race. Watch it from the BMW Corral with my son and we had a great time, great people, awesome views and great racing from all the GT teams. Congrats to BMWCCA and all the Chapters, BMW Driving School people, BMW Motorsport for their attendance, gifts, and support. Truly a great time ! Saw many Corvette , Porsche, & some Ferrari people come to our BMW Corral over the race. Guess they wanted to see BMW friendly people. Not sure If we would be received as well in their Corrals but hope we would. Audi folks were cool ! Had a bunch of crashers come in from the general public looking at all the Beemers, but they were cool. BMW , once again won in the GT Class YEA!!!! That is why I drive BMW M cars, great all around car in so many ways... but unless you have driven them over the years you will never know. BMW MOTORSPORT !!!!!!!!!!!!!!!!!!!!!!!!!!!!!!!!!!!!!!!!!!!!!!!!! No need to say more.

Tsingshan's Threat to Tesla: EV Maker Is In Battery Crosshairs
Tesla-Funded Research Reveals One of The Biggest Mysteries of EV Battery
END_OF_DOCUMENT_TOKEN_TO_BE_REPLACED