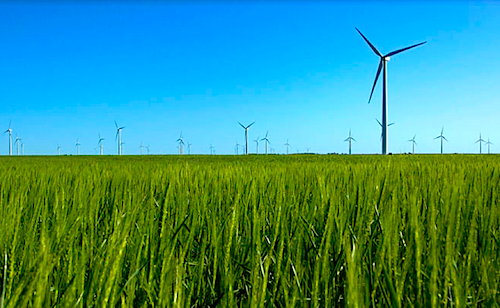 Wind power is becoming a more viable energy source and is being favored to power electric cars. As wind turbines become more affordable, will you plant one on to your house to recharge your electric car?
Advertisement

There was a time when enthusiastically we spoke of electric cars powered by sunlight and wind energy. No, this wasn’t the sixties, this was 2007 when the old petroleum world looked doomed without any chance of a comeback. Solar panels weren’t, and still aren’t energy dense enough to recharge a battery pack practically and quickly enough to drive your electric car and wind power… well, that’s another story.

Alternative Energy By The Numbers. By 2010, we had more than 40,000 megawatts of land-based wind power, enough to serve more than 9.65 million homes and avoid the annual emissions of 83.5 million tons of carbon dioxide. Offshore wind farms promise even more electricity. Costs have already fallen down and continue to do so. The US Department of Energy feels the cost of land-based wind energy can come down another 18%, with the cost of offshore wind energy down by 63% by 2020. Finally, according to the latest numbers, wind energy accounts to almost 60% of our alternative energy.

Car Makers Weigh In. Ford’s new Advanced Electrification Center, see our previous article,
Ford banking on batteries, electrification, engineers and jobs
http://www.torquenews.com/397/ford-banking-batteries-electrification-engineers-and-jobs
are also pushing wind energy at the heart of the matter. According to Ford’s, executive chairman William Clay Ford: “We believe a truly sustainable long-term solution will require a global transportation network that enables wireless communication among vehicles and infrastructure… bringing all modes of travel into a single network that links together public and personal transportation. Pedestrian walkways, bicycles, buses, airplanes, trains, automobiles – in our vision of the future everything would be fully integrated to save time, conserve resources and lower emissions.”

The 42 ft, 13m wind tower is made of galvanized steel with a 77W LED light that puts out 6930 lumens half way up for security measures. On it, UGE's 4K wind turbine gives 4,000-watts of electricity.

GE’s WattStation, or Durastation in that part of the world is part of a renewed push to use our natural resources to power electric cars and plug-in hybrids, PHEV. It’s funny to think, that a few years ago a wind powered car was a matter of joke. Today many Americans already drive their electric cars powered by sunlight, it would make sense in windy areas to drive yours using local wind energy.

Bob Wallace wrote on August 20, 2012 - 3:04pm Permalink
Installing your own wind turbine isn't a great idea. Wind tech is one place where size really matters. Larger swept area and taller turbine towers return more energy per dollar invested. Invest in wind farms rather than starting your own wind garden. EVs are a great partner for wind. On average EVs will need about 1.5 charging hours per 24 hour day. Cars sit parked about 90% of the time. If people plug in when they park (especially at night) those EVs can be used to suck up supply peaks when the wind is blowing strong and can drop out when other demand encroaches on supply. A very important dispatchable load. Lots of cars will be able to skip charging for a day or two. Wind generation now costs about $0.05/kWh and is expected to drop another 20% over the next few years. Wholesale wind at $0.04/kWh. Add in some transmission and profit pennies and we're looking at $0.08/kWh (?). A Nissan Leaf burning 0.31kWh/mile would cost about 2.5 cents per mile to charge. A 50mpg gasmobile would need to find $1.25/gallon gas in order to be as cheap to drive. (Even less per gallon when you factor in oil changes and more frequent maintenance/repairs.)
Nicolas Zart wrote on August 21, 2012 - 2:32am Permalink
Hi Bob, that's very true. A single turbine might not be enough for most houses unless you happen to live on a wind corridor with a space. Investing in a wind farm makes more sense. I don't see gasoline ever going back down to $1.25 a gallon, although my friend who lives in Qatar says the price at the pump is actually that much. I think they have very little incentives to go green there :) And at .08 cents a kWh, it's hard to argue for $4 a gallon.
Bob Wallace wrote on August 21, 2012 - 10:31am Permalink
Interestingly, some of the oil-producing countries are starting to install renewable generation. Most likely solar has become so cheap that they can use solar for electricity rather than burning oil in their generators and sell the oil to others. They probably are also thinking about climate change. If you live in a place that is already oppressively hot and has a lot of sea-level real estate you're on the front line. (I think this is my last comment on your site as long as I have to do battle with Captcha.)
Nicolas Zart wrote on August 21, 2012 - 5:18pm Permalink
Hi Bob, I'm truly sorry to hear you are having problems with the Captcha. I understand, I don't care for them either, as do most people. I used some of your comments on the Examiner to make a better case for wind energy. I find this comment interesting considering the petroleum producing Arabian countries have all the sudden realized that they haven't invested much in terms of infrastructure or future needs outside making money on raw petroleum. Qatar has been on a buying spree, as has Abu Dhabi and Dubai. It makes more sense for them to invest in solar film and panel production, but I don't think they got that strategy down yet. I was talking to a naval ship captain who turned me on to bigger ships needs and how an electric motor cannot replace (maybe yet) hydraulics. It was interesting and I will look more into it. I've looked forward to your comments. Hope the Captcha thingy works out. I've already informed my editor. Thanks, Nicolas