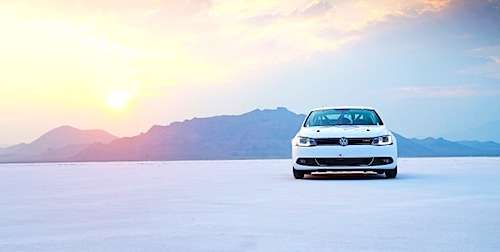 VW has quietly worked on a hybrid that would bring much needed competition to the mild hybrid inflow of cars on our roads. Find out how much it will cost you.
Advertisement

If you would have told anyone 3 to 4 years ago that VW would have a serious hybrid on the road soon, you would have been laughed at. VW, as its local domestic competition were far more interested in refining its diesel technology and had bet heavily on the future of hydrogen with fuel cell technology. Since we are still a little skittish about using diesel in this country and hydrogen fuel cell is still a little far away for most people, VW quietly worked on a quality hybrid.

2013 Jetta Hybrid. We covered the Jetta Hybrid in another outlet and we also talked about how VW got most of the testing done through its XL1 project that has been raced here and there. Read our: Volkswagen Working Seriously On Plug-In Hybrids With The XL1.
As of then, the price had still not been announced. Today, we know VW plans for not one version of its Jetta hybrid, but four different models ranging from the base model starting at $24,995 plus a destination charge of $795, to $26,990 for its SE model. An SEL model will also be available $29,325, as well as a $31,180 SEL Premium version.

Technically Speaking. VW’s 2013 Jetta Hybrid is the fastest production hybrid vehicle to date. Expecting to deliver a combined fuel economy of 45 mpg. It sports a turbocharged 1.4L four-cylinder TSI gasoline engine with direct-injection, which weighs at 216 Lbs and cranks out a healthy 150 horsepower, with a peak power output of 170 hp in S driving mode. The 0 to 60 mph is done in less than 9 seconds helped by an industry first, the use of a seven-speed DSG dual-clutch automatic transmission.

An extra 27 hp is delivered via the 20 kW electric motor powered from a small 1.1 kWh Li-ion battery pack, which can be driven in pure electric mode at speeds up to 44 mph for about 1.2 miles, perfect for those coffee breaks.

This shows VW is approaching the hybrid market in a very pragmatic way, as we would expect from the German carmaker. The XL1 testing has proven so far that VW has a solid platform from which it will use components for its 2013 Jetta Hybrid. As an interesting note here, notice that the company isn’t just putting out a single version of its hybrid on the market but instead chose four, giving the Jetta Hybrid a full range. It’s good to see VW join the rank of alternative energy mass-produced cars with its 2013 Jetta Hybrid.