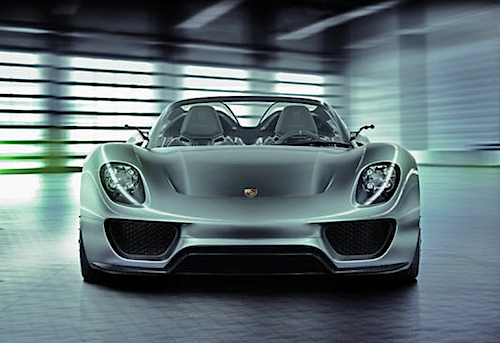 The highly exotic Porsche 918 plug-in hybrid will set you off a few pennies and then some for one of the most extreme and rather clean performance in the world at $845,000.
Advertisement

There are expensive cars, and then there are really expensive cars. The Porsche 918 plug-in hybrid, PHEV is in the stratospheric category. What $845,000 buys you however, is a car that as unique as its performance includes clean fun.

Porsche’s Wild 918 Dream. It raised a lot of eye brows in 2010, was dismissed as just another PR stunt and then came back to woo us with even more head scratching. A Porsche with an electric drive? Déjà vu all over again. The gist is Porsche, or at least Ferdinand Porsche was no stranger to the electric propulsion. While working at the Jakob Lohner & Company in 1898, Ferdinand built his first electric car. The term carriage would be more appropriate since the "System Lohner-Porsche" was basically an electrified carriage car driven by two electric motors within the front wheel hubs. A four-wheel drive version was created in 1900. In 1901, Ferdinand sought to overcome the limitation of the current state of lead acid batteries by building a hybrid that could reach 35 mph, roughly 115 years ago.

The Porsche 918 steps into the automobile world over a century later with numbers that leave the original 35 mph as quaint. This PHEV sprints the 0 to 60 in 3 seconds, and did I mention it will cost $845,000?

Where Does the Porsche 918 Fit? Obviously, not too many people will be able to afford the 918. It’s a case of if you need to ask the price, then it’s not for you. But the 918 caters to a specific bunch, the well to-do looking for the next big thing, the early adopters, those who understand the inherent advantage of the electric drive, especially when it comes to performance cars.

Technically Speaking. The car packs serious numbers. The V8 gas engine already puts out a healthy 570 hp. The rear electric motor provide 90 kW and is mounted to the rear engine and transmission, while the front motor provides an extra 80 kW to the front wheels. Both electric motors produce a total extra 200 hp. What this boils down to is when all three, gas and the two electric motors are working together, the Porsche 918 has 770 hp combined output, with a 553 pound-feet of torque at your disposal. Although its electric range is limited, 16 miles only, the electric motors here are more for added power then “green” performance. Feasibly, you could take your $845,000 Porsche 918 grocery shopping without burning a single iota of gasoline, a bragging right very few people will ever have.

Fuel consumption is very respectable overall with its 77 mpg, that’s in European-specifications. That is helped with copious amount of carbon fiber body parts keeping its slim weight down to a mere 3,700 pounds. Not bad for a 770 hp car that should continue Porsche’s excellence. And if 770 hp is just not enough for you, remember you can always really break the piggy bank for the race version that uses the famous kinetic energy recover system, KERS flywheel system that captures energy when braking and releases the power boost for up to 10 seconds.

While many will call this a vanity PHEV, others will see serious performance, and a few will see a serious push into the alternative energy propulsion era. This car has enough to be used every day in comfort while still have fun at the track on weekends. Nonetheless, what Porsche does here is strike a very high note showing that hybrids can mean serious power. Oh, and in case you were interested in purchasing the $845,000 Porsche 918 Plug-in Hybrid, there is a $200,000 deposit, of which you can apply the $7,500 tax credit to help with gas, for instance.