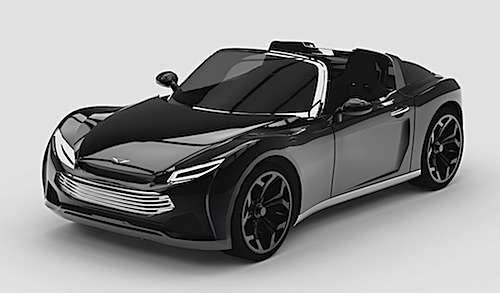 Electric cars are actively seeking lightness and energy density. Each new concept, such as this Pariss electric roadster push the performance envelop.
Advertisement

Another electric wonder at the Geneva Auto Show that might have gotten squashed under the mountain of reporting and information on the event is the Pariss electric Roadster. This incredible little electric car would be serious competition for the Tesla Roadster would it still be sold today. Today, the company produced a concept it showed at the Geneva Auto Show. We are stepping into generation 3 of electric cars today.

The Pariss Electric Roadster. The one thing we can all agree when it comes to electric cars is that it has spawned an endless stream of concepts, prototypes and elaborate, out the box designing. The Pariss electric Roadster takes on some of the current model cues and mates a potent electric drivetrain with an otherwise very light roadster chassis.

Technically Speaking. Weighing in at 1,653 Lbs, the light Pariss also packs 100 kW (134 HP), to move its tiny weight from 0 to 60 in less than 5 seconds. The feather weight achieves about 125 mile range. While we might be slightly below Tesla Roadster territory, the Pariss, if mass produced would be an affordable around town electric car with enough power to have fun. Think here Subaru BRZ and Scion FR-S.

Two electric motors power the wheels, one in the back, the other in the front and that is the extent of the mechanical information we have at this moment. See below for more.

Design Wise. Obviously the Pariss takes cues from many current cars yet somehow strikes a good overall balance in achieving its distinctive signature. You’ll find subtle hints of Aston Martin/Ford in the front facia, Saturn and Lotus throughout, as well as the obvious Tesla Roadster cue. Overall, the electric car looks remarkably close to a Pontiac Solstice from the back.

The interior is treated soberly, elegantly accompanied by a horizontal wood strip across the dash. The cabin is sober, with subtle hints of high-end, a la Mercedes.

When And How Much? The Pariss will be officially launched early 2013 and its unveiling at the Geneva Auto Show shows the company seems to be interested in public opinion. Should the public favor it, there would be chances of seeing it, either like this or in a more mass-produced version of the electric Pariss car. How much? Mum’s the word, so far.

Though only officially a concept, with enough public demand, concepts find a reality and if at small production number, closer to the original concept or prototype. The Pariss electric roadster shows much potential on paper and through these videos on how light weight means better electric car efficiency.