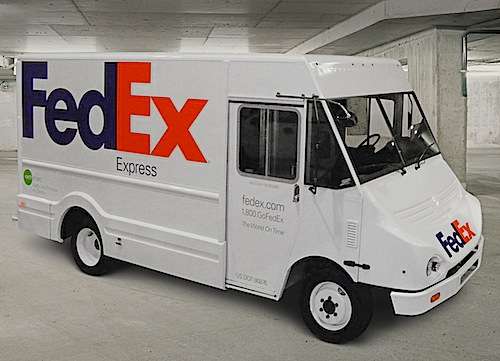 The battle for the New York City delivery and cab market is fierce. The latest ongoing push for greener competition will see a few Smith Electric Vehicles Newtons trucks roaming the streets.
Advertisement

Smith Electric Vehicles is showcasing its new Newton truck in Times Square, fresh from where it plans to build them in their Hunts Point, NY in the South Bronx assembly plant. Smith Electric Vehicles hopes to continue winning a even greater share of the New York City delivery market it already has. You might recall a while back the company made some headway when it leased some of its vehicles to Fresh Direct, Coca-Cola, Duane Reade and Frito Lay.

Bridge Over Troubled Water. In our previous article, we mentioned how the company was running into trouble keeping its finances afloat, see out: Smith Electric Vehicles Slashes Production Targets Again. This means good news to the beleaguered electric vehicle, EV company as it gains some momentum in the limelight, once more.

NYC, Pollution & Cars. If you lived in NYC through the 1970s and early 80s, you’ll recall two things. An insurmountable amount of trash stocked pile high on the streets in the middle of summer and an endless see of yellow cabs and other gas guzzling vehicles, happily churning out 10 mpg. The city was choking on itself and it wasn’t too long before local officials reluctantly decided to tackle the pollution problem. A few decades later, a stronger push was made for more fuel-efficient vehicles.

EV Shines In NYC. Needless to say, electric vehicles particularly shine in city traffic. Short trips, stop and go traffic are what electric vehicles do best. Conventional gasoline and diesel cars are at their worse, adding unnecessary smog and other pollution related emissions in already congested streets. Smith Electric Vehicles realizes that the mass adoption of electric vehicles needs to happen through city driving. In fact, the company has taken the intelligent strategic business model of focusing on the last mile of delivery. Effectively, Smith Electric Vehicles is placing itself as the “last mile” company, allowing the transport of goods from central depots to stores in the city to be done with electricity.

Duane Reade's truck average 15-20 miles in slow city traffic, making the last part of the route not very cost effective at $4.15 a gallon. Using electric vehicles where they operate best is not only a good business model, but also paints a friendlier community face for the company. While Smith Electric Vehicle’s Newton cost around $75,000, battery pack not included, the company believes the lease will save Duane Reade a lot over the six years contract.

It’s good to see good news associated with Smith Electric Vehicles with its Newton electric trucks that continues its gradual overtaking of the busy streets of New York City.

Tesla Contemplates A New Strategy for China Retail even As Sales Boom
Jay Leno on Elon Musk & EVs: “I Think He Should Get ... Credit"
END_OF_DOCUMENT_TOKEN_TO_BE_REPLACED