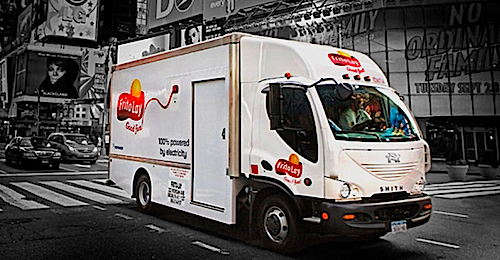 There was a time when it seems Smith Electric Vehicles would take the world of electric trucks by storm. Today again, they announced another production target slash, sending an uncertain message to a shaky market.
Advertisement

Smith Electric Vehicles. Smith Electric Vehicles intrigued and impressed many of us back in 2009. Since then, the English company has changed hands and has had its fair share of ups and downs. Call it over the top expectations but the electric truck maker is downsizing it production target again in order to meet current demand.

The original company was founded in 1920 in North East England and was later bought in 2011 by its US subsidiary for $15 million, now based in Kansas City, Missouri. Today, the electric van and truck maker said it won’t meet its original production target and warned it was running short of cash. This comes in light of the recent complete stock offering it is tried to reach.

Smith Electric Vehicles Now. Jumping into a fairly new electric van and truck market is dicey business at best, as we can see, even after it planned to raise $125 million from an initial public offering. This somewhat reduced its debt and pay expenses but further cash is still needed to continue its operations. The company filed another Securities and Exchange Commission, SEC process in order to work through an $11.5 million loan to ensure operations through September.

In this particularly lowbrow election year, this bad news comes after the fact that Smith Electric Vehicles had already received $32 million in federal grants. Even President Barack Obama came to visit the Kansas City plant in 2010 in an effort to highlight the efforts behind building a greener economy. None of this has truly helped the company establish a long lasting financial health.

Smith Electric Vehicles Success. We shouldn’t jump to conclusions that Smith Electric Vehicles is not a worthy electric vehicle, EV company. Indeed, the company has found a lot of success among prominent delivery businesses, such as the high profile purchasing of its medium-duty electric trucks and vans from Frito-Lay, FedEx and Staples. These electric trucks have been mainly uses as delivery vehicles.

Some of the problems are not Smith Electric Vehicles directly, but its providers. Indeed, suppliers at both the Kansas City plant and in the United Kingdom have had problems delivering assembled components. Chassis, motors and battery packs are made from other companies also having financial difficulties. Add to this, their suppliers are fairly small and have high costs and this gives you reliability and quality problems.