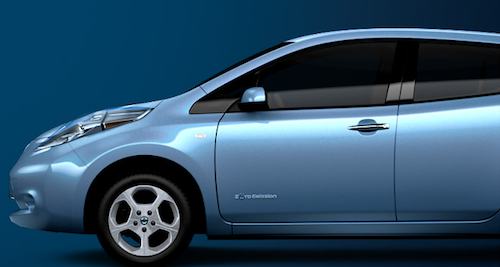 While we don’t usually associate Latin America with the launch of exotic alternative energy car, Nissan said it would launch its 2013 Leaf in Puerto Rico.
Advertisement

While Puerto Rico is not Latin America, it opens the doors to the vast continent for Nissan. Nissan Motor Company has announced their new 2014 Nissan LEAF will be ready for the Puerto Rican markets in January 2013. The reason behind seems to be simple. According to the company’s press release: “Zero emissions, Zero excise taxes; Puerto Rico joins select group of countries building a foundation for zero-emissions mobility by setting consumer incentives and promoting the creation of infrastructure.” Zero excise taxes...

With an initial supply of 150 all-electric Leaf, Nissan is striking a loud PR coup by choosing Puerto Rico. Not only will this be a first in bringing clean transportation and new technology to the island, but it also appeases the politics involved behind the $1.4 billion loan the carmaker received through the US Department of Energy in order to enable the production of the Leaf and its battery pack in the Smyrna factory in Tennessee.

Zero Excise Tax. Maybe the key words here are zero excise tax. Indeed, in order to ensure better sales, the Puerto Rico Government pitched in to help Nissan sale its all-electric Leaf by offering a 65% excise tax cut to buyers of all hybrid and plug-in vehicles. To sweeten the deal further, the government added a 100% exemption on complete electric vehicles until 2016. This comes on the heels of fourteen months after Nissan and the government of Puerto Rico signed a memorandum of understanding, MOU to explore and foster the future introduction of electric vehicles in Puerto Rico.

According to Bill Krueger, vice-chairman of Nissan Americas: "Nissan made a conscious investment on zero-emissions mobility with a 100 percent electric car that has proven its quality under extremely different driving conditions around the world. We are proud to collaborate with some of the most progressive national, state and local governments - in terms of EV policies - which enable the arrival of the Nissan LEAF by following through on their environmental vision. Public sector partners, such as Puerto Rico, recognize their role, not just as supporters of green technologies, but as change agents that consider the practical conditions under which the future can be ´pulled forward' and realized today,"

It makes plenty of sense for Nissan to push the introduction of its all-electric Leaf in Puerto Rico. Islands have smaller traveled distances and Puerto Rico is a great bet for electric cars, such as the Nissan Leaf.

JP White wrote on August 30, 2012 - 7:13am Permalink
I seriously doubt that the 2014 LEAF will be sold early next year. The 2013 LEAF has yet to be sold anywhere. Maybe just a typo? It's interesting that despite slumping sales in the US Nissan would launch a new car away from its current market. I wonder if Nissan have second thoughts about selling their vehicle here in the US.
Nicolas Zart wrote on August 30, 2012 - 9:29am Permalink
Hi JP, there seems to be a lot of comfusion about the vehicle date and release. I'm confirming it with Nissan. The press release was a little cofusing. As far as the market segment and Puerto Rico, I think it boils down to opening a new semgnet and making it a strategical one, an island. There is less distance to cover and this is somewhere an EV would be best suited. Thanksm Nicolas
Anonymous wrote on March 12, 2013 - 5:24am Permalink
Nissan would not have invested in the new tennesse plant to make the leaf in the usa, if they were not fully commited to selling the leaf here.
Nicolas Zart wrote on March 13, 2013 - 4:10pm Permalink
No one is contradicting that here. Yes, they will continue the sell the TN made EV.
Anonymous wrote on August 31, 2012 - 3:25pm Permalink
Forget the scarcity of charging stations on the Island... electricity costs as much as 28 cents a KwH... people pay hundreds of dollars a month in electricity here without running air conditioning! That ridiculously high cost of electricity here is what keeps the economy from growing. Gov. Fortuno is trying to bring the cost down by converting several generating stations to natural gas later this year, but it will be a while before anyone but the earliest (and richest) adopters buy an all-electric car in Puerto Rico. PS: Thanks for pointing out the U.S. Territory of Puerto Rico is not Latin America and the U.S. citizens born there are not Latin Americans.
Nicolas Zart wrote on August 31, 2012 - 5:33pm Permalink
All valid points, indeed. I love how the media jumped on the "Latin America" angle with this story and had to give it a wink. Yes, electricity is expensive in Puerto Rico and it will take some time before it comes down even after the conversion. I thought it was an interesting strategy from Nissan and time will tell if it worked or not.
Islander wrote on January 31, 2013 - 7:54pm Permalink
I think Nissan choose Puerto Rico ad a trial market in order to avoid bad news mainland press coverage if Nissan Leaf fails. Same happened with Daewoo korean car brand. It was launched ad a trial market in Puerto Rico. In fact, Chevrolet Sprint 1981 was a lab. experiment and several chevis were graymarketed inin east coast. It is important to tell that excise tax exemptions are federally granted...so.us tax payers will be finally paying .
Nicolas Zart wrote on January 31, 2013 - 8:36pm Permalink
That could very well be and history has shown a few similar cases like that in the past. Thanks for your input. Nicolas
ecologicAll wrote on April 18, 2013 - 12:52pm Permalink
battery size: 24KWh milles per full charge: aprox 80 miles today cost of electricity: $.30 Then.... 24Kwh($.30/kwh) = $7.2 to charge a battery full $7.2/80 miles = $.09 per mile The average person drives 20 miles or less per day 20 miles ($.09/mile) = $1.8 or less per regular day is the cost of using a Leaf in PR Plus.... you can install solar panels, lowering your Utility bill to just $3/m and the cost to use the Leaf every single day will be $0 About the scarcity of charging stations... electricity is no gasoline, you do need gas station because puertorican houses dont have oil in their back yards But every single house have electricity, 120V and 240V outlets, thats all you need to charge the Leaf. So you DONT need a charging stations infrastructure to start selling EVs in PR As of today, there are at least 5 Teslas and 2 Volts in the Island, driving every single day without a charging infrastructure. all you need is a 120V or a 240V outlet, and there is one every 12 feets If you still need infrastructure, just call me and we can a charge station at your job parking spot
ecologicAll wrote on April 16, 2013 - 9:36pm Permalink
we are in April 2013, still no EVs for sale in PR
Nicolas Zart wrote on April 18, 2013 - 12:06pm Permalink
I was also wondering about that. This news came before the hot summer battery problem snafus. I'm willing to bet it won't happen, but then again the world of automotive is always full of surprises.