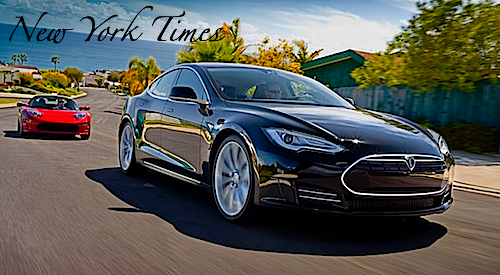 Case closed, the New York Times backs away from John Broder and sides back to Tesla. The model S gets a boost, Broder will get the boot.
Advertisement

NYT Vs. Tesla Motors. None have caught the eye of the public then the last few weeks of disdainful mainstream general news, epitomized by John Broder for the New York Times on his Tesla Model S rant, which not only discredits him but was harming the NYT’s image.

Musk Attacks. An Elon Musk message came out on Tesla Motors’ website saying:”Yesterday, The New York Times reversed its opinion on the review of our Model S and no longer believes that it was an accurate account of what happened. After investigating the facts surrounding the test drive, the Public Editor agreed that John Broder had “problems with precision and judgment," “took casual and imprecise notes” and made “few conclusions that are unassailable.”

Elon talks about how software updates will make his electric cars, so far only the Model S, but once the Model X and then again back to a Roadster again. Again: “The bottom line is that the Model S combined with Supercharging works well for a long road trip, even in a cold, snowy winter. Nonetheless, we will keep increasing the number of Superchargers, improving the software in the car (via over the air updates), and the technology behind the Supercharger itself. Without people even having to think about it or Tesla having to physically touch the car, the free long distance travel enabled by our Superchargers will steadily improve with each passing month.”

The infamous John Broder’s February 18 New York Times piece showed how little proper understanding Broder had, as many mainstream media reporters show at events. These people are not always the best candidates to drive these cars and give their opinion public, albeit usually an erroneous one. The Venerable gray Lady acknowledges "problems with precision and judgment" in an earlier piece that faulted Tesla's new electric car charging infrastructure.

Many will see this as yet another sign of how professionally dilapidated the news media has become and after all, can you blame them when only three companies owns all the news here? Certainly not and this New York Times going back over its previous judgement gives the electric car validity as a daily, reliable, efficient means to travel.

Alex wrote on February 20, 2013 - 6:13pm Permalink
National Geographic HD - Tesla Model S : youtu.be/NAxtOwo8S8w
Tre Deuce wrote on February 21, 2013 - 12:03pm Permalink
Well, one thing can't be argued, at least not seriously by anyone with any sense of design, the Model 'S' is the most beautiful 4-dr sedan currently in production, on the planet. It is also interesting how much vitriol electric cars generate with some people. Reminds me of how much some drivers hate bicyclists. Makes you wonder about how their brain is wired.