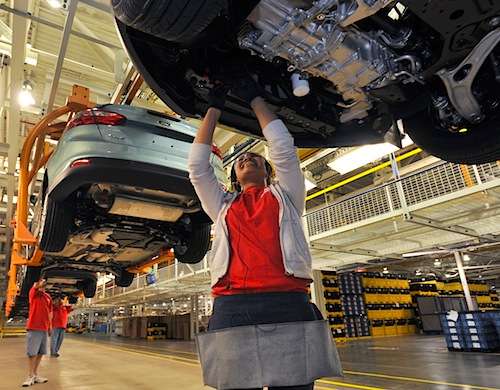 Electric Car Drivers to Get More Choices for Charging Their Batteries

In the typical chicken or the egg philosophical conundrum, electric cars (EVs) and their equally important charging infrastructure have struck a balance judging by the ever growing choice of charging stations hitting the market.
Advertisement

In the race to get electric cars out to consumers, the other less highlighted races are that of a charging infrastructure and updating the grid to become a smart grid. While the first is well embraced by car makers, the second has received less coverage but is equally active. The grid is another question and depends on research, private companies and government push.

GOe3 Ambitious Charging Stations Across The USA. GOe3 has been promoting a national campaign for electric vehicles and energy independence and is unveiling its first 25 of 500 planned charging station planned to spread across the country. Starting at Biosphere 2 in Oracle, Arizona, the launch of these Level 2 electric vehicle charging stations is making interstate travel a reality. GOe3 ups the ante, on in this case the amp by providing GOe3 are Level Two, at 70 Amp or higher. This is a serious boost compared to today’s average of 30 amp stations, which dramatically cuts down on recharge time.

The company has worked hard with its partner to cover so far I-70, I-40, I-20 and I-10 stations conveniently located every 50 - 75 miles, making an EV drive from Flagstaff to Tucson a possibility. If you are in Oracle, Arizona now, head on over to the public event, free for children 15 and under, adults $20. Visit www.b2science.org for more info.

Made In The USA. Leviton’s line of chargers takes into consideration future needs and security seriously. Backed by a 3 year limited warranty on its entire Evr-Green line, it not only complies with industry safety and performance standards, but achieves the sought after National Electrical Code sticker. With its weatherproof NEMA Type 4 cover, it can be used when the installation of a Pre-Wire Installation Kit or converted to a hard-wired installation, as needed. It even comes with an 18- or 25 ft option.
All of this is good news as the latest statistics show a growing demand for electric car in the US this year. According to Bloomberg, electric vehicles are the fastest growing segment in the US auto market as of the first quarter of 2012. Sales in this sector alone climbed up to 49% during this quarter for a total 117,182 vehicles from 78,527 in the previous year. This is probably due to the higher choices and incentives offered, but it also clearly marks the public is ready and starting to look into EVs more seriously.

According to Lithium Investing News, Richard Canny, President of the Electric Transport Advisors, says the global analysis of electric vehicle demand is continuing its trend when he commented: “adoption rates for EVs are likely to be reasonably well-balanced between the major automotive regions – the US will continue to adopt EVs as a key enabler for energy security and diversity. In Europe, EV demand will be heavily driven by the need to reduce CO2 emissions.”

All in all, this spells good news for companies who have worked hard making electric cars a reality for today and tomorrow. Illinois finds itself in the comfortable position of saying its electric charging stations outpace those of electric cars, making this state ideal for the next wave of EVs. While Fox has just learned that battery packs are expensive after hearing Alan Mulally talk about the average Ford Focus electric pack being anywhere from $12,000 to 15,000, this is something widely known for some time in the press world. Charging stations built across the US are facilitating the adoption of electric cars, making interstate and cross country electric drive a reality sooner than later.

Tesla-Funded Research Reveals One of The Biggest Mysteries of EV Battery
Tesla Tesla Buyer Nets a Whopping $12,000 Discount After Asking for Reduction
END_OF_DOCUMENT_TOKEN_TO_BE_REPLACED