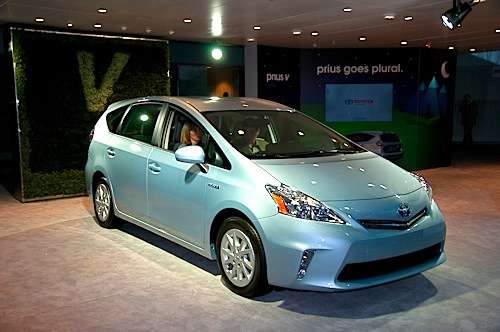 Gen Y is less cluttered with concepts of how a car should powered then older generations. According to Craig Giffi, vice chairman and automotive practice leader at Deloitte LLP, they want hybrids more than older generations as reported at its Shifting Gears conference in Detroit with its annual survey of Gen Y consumers and what they seek in an automobile.

The Numbers. The numbers speak for themselves, 59% of Gen Y respondents would choose an 'electrified vehicle' over anything else. The interesting number is 57% favor hybrid gasoline-electric vehicles over pure battery 2% electric vehicles or 37% vehicles with a traditional gasoline-only drivetrain. Surprised? In some ways no, but preferring hybrids over pure EVs sheds interesting light as the amount of education and disinformation Gen Y has received.

Why Gen Y Is Attracted To Alternative Energy Cars? Not much surprise here with the deciding factor, 89% Gen Y consumers want vehicles with better mileage compared to traditional gas cars, based on gasoline prices rising above a symbolic $2.75 a gallon. Furthermore, 49% Gen Y would pay an additional $300 for each MPG of improvement for an HEV. This is highly significant since it’s only $50 less than the $350 mile-per-gallon premium Deloitte estimates HEVs currently cost over tradition gas cars. On the flipside, Gen Y is not in favor of plug-in hybrids, PHEV or EVs.

Why Is This Important For the Hybrid and EV Market? With 80 million consumers, Gen Y is a big piece of the automotive industry market that drives the adoption of hybrids. In other words, a quarter of cars bought are by Gen Y.

What Else Can We Learn From This Generation?
Social media is big and a way of life for Gen Y. They see cars as more than a transportation means, and as an extension of their social media. In other words, onboard graphic displayed internet-enabled with constant real-time connection is very important to them.

This 4th annual project surveyed 1,500 Gen Y, Gen X and baby boomer in the US, 250 Gen Y in China, and 300 Gen Y in Western Europe. Deloitte conducted this global survey between September and October 2011 and defines Gen Y between the ages of 19 to 31.

All in all, Gen Y is showing the logical and pragmatic way forward. HEVs have been hailed as the way forward from conventional gas cars, until we can achieve a much cleaner propulsion system.

Viejolee wrote on January 20, 2012 - 10:25am Permalink
Surprised? In some ways no, but preferring hybrids over pure EVs sheds interesting light as the amount of education and disinformation Gen Y has received. What is the misinformation that Gen Y has received. Are you saying that pure electric is the way to go at this time. The rest of your article did not seem to back this up. And how much does the electric car producer publish of actual costs and negative aspects of producting more electricity, especially since much of it comes from coal fired plants which cause much sickness and death.
Nicolas Zart wrote on January 20, 2012 - 12:06pm Permalink
Hi Viejolee, The point was that inevitably, we are headed towards the electric drive platform. Even our friend Alfieri Maserati (Junior) told us this at a dinner party. High praise for me! The point is that there is much mis-information when it comes to EVs. Your point highlights it very well. Replacing the tail-pipe emission to increase demand on power stations is still less pollution. There have been plenty of research and has been proven over again. Go to Plug In America for more information on that. Coal stations cannot be throttled. They run at 100% capacity, use the electricity or not. That's why utilities are rushing to work with solar, wind, hydro and geo-thermal, while becoming more efficient in the distribution process. Talk about sickness and death. At the port of Long Beach 710 freeway, children going to schools near the highway have lungs that will never grow to their normal capacity due to tail-pipe emission. What will we tell them when they grow older, be a drain on healthcare and all along, "Sorry kids, we knew it". Indeed, talk about sickness and death. I have seen many people around the Los Angeles area who have leased and bought solar panels to run their EVs. Yes, there is an initial investment but the rewards are guilt free, pleasure driving. Gen Y is also a product of our highly ad and marketing intensive society. Hybrids are being pushed into mass-consciousness as the best choice for now, while EVs are being depicted as not practical... so far. Many who drive EVs got it right. Use them for your every day commute and either rent a car for the longer trips, use a gas car, or if you can afford it, by a PHEV. There is a practical and logical progression toward pure EVs, regardless of our personal emotions. It just makes sense and plenty of groups, utilities, car makers, etc back that. There are only solutions and when we put our minds to it, we can make anything work, even an internal combustion engine, which by design is not efficient :) Thanks for your comment, Nicolas
Viejolee wrote on January 20, 2012 - 12:30pm Permalink
Thanks, all good points. I have a son who is very interested in all electric cars; has built one, and is looking at the new ones as a means of transportation. I think they are one of the solutions for the future. Having been in the nuclear field since 1960, my viewpoints and experience don't coincide with many. I also feel we are not doing enough to find ways to use the ocean to produce better electricity, water, cities, etc. The big thing is to keep working on all these concepts and keep open minds so that they will change as new things happen. In most cases with a better support system, many could use all electric most of the time. I live 90 miles from a museum I used to drive to 304 times a week and now there are all electric cars that could allow me to drive there, charge the car while working, then drive back home on a single charge. I am sure in a few short years that will be even more practical. I also hope that the cold-fusion process will be able to be used in producing energy and electricity. Viejo
Nicolas Zart wrote on January 20, 2012 - 1:53pm Permalink
Hey Viejo, Now you're talking something that interests me. I am somewhat familiar with nuclear energy and it has come a very long way since the sixties when the Russians "kindly" took the used rods off our hands only to dump them in their northern sea. I think we are now close to 80% recyclable? I completely agree that the biggest most sustainable energy source is the sea. While there probably is more solar power, its foot print on the eco-system is hard to justify. The sea makes it easier to use. In the end, you are right, we need to keep our eyes wide open, use and develop as much alternative energy as we can in order to never again be dependent on a specific resource. There are plenty of solutions, a huge field of alternative in front of us and plenty to get us out of a recession that happened due to outdated business models. Now let's get out there and do something constructive. Thanks for your comments, Nicolas