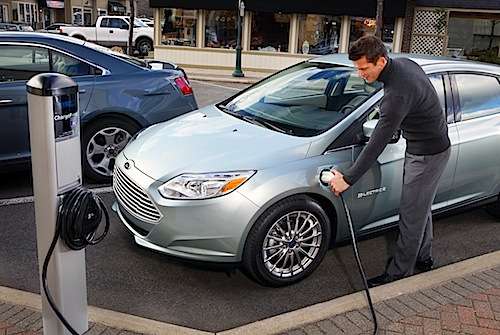 Ford Shows Potential With its Power of Choice

After a day spent behind the wheels of almost every Ford available, my wife and I walked away from it feeling there was a Ford for everyone out there. The trick is to figure out which one is yours.
Advertisement

Our question was simple, does Ford offer a car for every taste or is it stretching itself? Putting this question into context, after having weathered the worse recession ever, Ford is doing a tremendous job.

Everything But The Raptor. Ford brought a few Focus, Fusion, Taurus, Escape, Explorer, Mustang and C-MAX. In order to test Ford’s “Power of Choice” most came in different versions. Only the Fiesta and Rapture were not part of the outing.

Ford’s Focus. The Focus is fun in either gasoline or electric. The ST has plenty of get up and go but its greatest asset is driving it in a civilized manner and accelerating hard, feeling the turbo reveal another aspect of its personality, spritie. The Focus EV still surprises us, even after driven it a few times. It feels solid, like a regular car but with that indescribable EV torque. I interviewed a media person who drove in with a Ferrari 308 GTS about his favorite drive. He had to admit it was the Focus EV. High praises from a Ferrari driver!

Fusion Hybrid. The new Fusion Hybrid 2013 looks good and to quote J Mays, head of design at Ford, is the synthesis of European and US tastes. The original Fusion Hybrid impressed me 3 years ago, and the 2013 which uses the Mondeo platform shows even more work. You can still drive it on electricity alone up to 45 or so MPH until the engine pulls in. My wife particularly liked the cloth seat that for once didn’t feel as if they came from recycled potato sacks. The Fusion Hybrid won’t brake the piggy bank and at 47 MPG all around, you really can’t go round. 47 MPG all around, $27,495, without rebates.

C-MAX Hybrid. My wife had rented a C-MAX two weeks ago with friends and all enjoyed the handling and 184 miles with less than 5 gallons. The C-MAX hits the sweet spot for families needing a frugal car with space. 47 MPG all around $24,995 without rebates.

Escape EcoBoost. The last Escape hybrid achieved 37 MPG in city driving and the EcoBoost gives this version just that, a welcome boost. The Escape has been redesigned and looks modern on the inside. If you don’t need that full-size Explorer, the Escape should be more than enough.

Explorer Sport. This SUV’s sportier package received a lot of modification, with stiffer suspension and torsion bars. The V6 hides its twin-turbos low for an improved center of gravity. The Sport version definitely handles better than any other Explorer you’ve driven. The only problem you’ll have is driving behind an older Explorer.

Cream Of Mustang. Of the three Mustangs available, we jumped on the Boss302, which I had previously driven in Dearborn. Maybe it’s the roar of the engine, the throaty burst from the exhaust or simply the silly fun of driving a modern day muscle car but the Mustang is still fun to drive. Its handling has greatly improved. Even though I see little practical reasons for one, the fun of driving such an iconic American muscle car never fails to make you smile.

Taurus For The Business Man. The first time I drove the new Taurus, it was the very first SHO. It was so impressive, I decided there was hope for Detroit after all. This was a car I felt I could drive on European highways and not feel ashamed. The 2L EcoBoost is no SHO but it’s no slouch either. The car is refined with plenty of get up and go, and in many ways comfortable enough to drive your important business people around.

So to the question does Ford have a car for everyone or do they stretch themselves too thin? We feel the company does a very good job at offering almost anything anyone wants. 99% of commuters will find what they want and more importantly, what they need. So whether you want a fun turbo Focus or an electric one for around town, a hybrid Fusion sedan or a roomier C-MAX Hybrid, Ford is hitting the right notes and offering a Power of Choice not many others do these days.