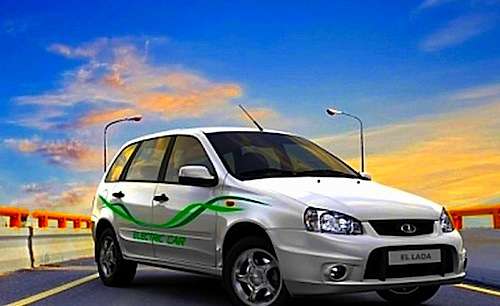 An Electric Lada Is Not So Surprising

You’d think the tough, rugged Lada image we have would continue its happy life with rather inefficient gasoline engine but a project aiming to electrify some Ladas is not that surprising.
Advertisement

After Renault delivering two all-electric Kangoo to the service of Pope Benedict XVI and his security service, the company is also working with another subsidiary, Lada. See our: The Pope Gets An Electric Mobile where we talk about Carlos Ghosn officially giving the two EVs to the Pope. Now together with its strategic alliance sister company Nissan, the company will help the Russian company Lada to produce its first ever-electric vehicle to market.

Lada’s New Face. Of course, most of us remember Lada cars as sturdy, no thrills, tough little eastern block cars destined to move the mass cheaply with little amenities if any. So it might come as a surprise to see that not only is Lada still alive, but also trying to revamp its image. The company recently announced it would create its first all-electric car concept, which will be presented at the 2012 Moscow Auto Show. Backed by Renault and Nissan, which own 50 percent stake in the company, the car won’t reinvent the wheel but will based its initial design on the already existent Kalina model.

Technically Speaking. Instead of using the regular Kalina combustion engines, the Lada will sport a Chinese lithium battery pack claiming an enthusiastic 93 miles of range. The top speed is around 80 miles an hour and the price… well, that will come in higher than regular Lada owners are used to. If the regular Lada Kalina costs anywhere from $8,000 to 10,000, El Lada, its electric version will climb to about $31,148.

Since Nissan doesn’t sell its Leaf in Russia and so far, it doesn’t seem as if Renault plans to sell its all-electric line of Z.E. there, the Lada might be the best bet for those seeking the electric drive. If Lada markets this electric vehicle correctly, it could start a fashionable market trend for trendy eco-conscious Russians looking for something more than just Western gas-guzzlers.

While the name Lada in this country evokes a different past, the company has evolved over the years in Russia and else where it is being sold. With no less than 7 models on the market, today’s Ladas are a far cry from the quirky yet tough little 70s SUV. The closest Lada we might find on our continent would be Canada where they are still being sold today.

With news of this old company turning a definitive leaf on a new electric drivetrain era, this shows that no sector of the global automobile industry has been left to slumber with gasoline models. While the pure electric drive will not replace hybrids or even plug-in hybrids within the next few years, an electric Lada is surely a sign that times are a’changin’.

Tesla Contemplates A New Strategy for China Retail even As Sales Boom
Jay Leno on Elon Musk & EVs: “I Think He Should Get ... Credit"
END_OF_DOCUMENT_TOKEN_TO_BE_REPLACED