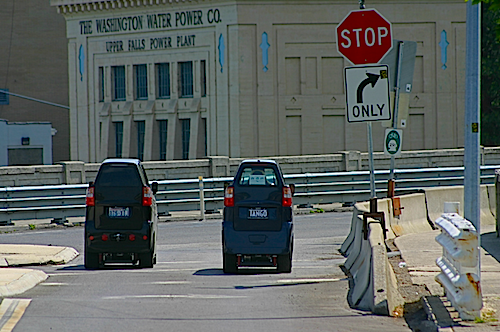 No matter how you look at it, electric cars present an engineering paradigm that sets free the minds of engineers. See how the Commuter Car Tango tackles conventional constraints.
Advertisement

A conventional internal combustion engine, ICE car is difficult to design, manufacture and maintain. Opposing pistons are not the most efficient mode of propulsion since with each action comes its opposite. While the gasoline engine has made great strides in a century, it has limits. An electric motor, either inside a wheel or on a differential is still more efficient. The last problem is to solve the price and weight of batteries.

The Real Problem With EVs. If we get down to it, the real problem with electric vehicles, EV is not the range. Most people travel less than almost any range offered by any EVs. Battery weight is not an issue either. A commuter car doesn’t need to have state of the art lithium batteries to drive a few miles. With that in mind, Rick Woodburry proved an EV can be free from the constraints of an ICE design. When he designed his Tango, he designed it with congested city traffic in mind. The Tango is so tiny, you can fit two side by side in one lane. The trick was to put driver and passenger one in front, the other behind, as in motorcycle driving.

How Tough & Roll Over? It’s tough. With its NASCAR strength internal roll cage, it can withstand head on collisions better than your SUV. How tough? The roll cage meets or exceeds FIA racecar regulations, which means it is designed to protect the occupants crashing at over 200 mph. What about roll over? If you’ve noticed the design of the EV, your first thought would be that it could tip over. Yes, it’s a tad bottom heavy but in the world of EVs, that is a good thing. The lower the center of gravity, the better than handling. In fact Rick told me back in 2007 a 911 Porsche would tip over before the Tango would. Why is that? Originally Rick felt lead acid batteries offered sufficient performance. The Tango just didn’t need the lighter lithium batteries. See below how well it performs.

Charging is pretty fast also with a 40 amp on-board charger compatible with J1772 and a new 200 amp off-board charger is under development.

Price. Price is always the sticky point with new EVs and Rick now has a waiting list of lower price Tangos. Sit down, the T600 is not for most people. It starts at $158,000 with a $10,000 deposit, batteries and motors not included. It’s still cheaper than an exotic gasoline car. Not your everyday car but one heck of an exercise proving EVs break from the mold with performance in mind.

What’s so special about Rick’s Tango T600 is that it’s the perfect “commuter car” for busy city driving. If George Clooney had one, it must be good, right? It also shows how removing the constraints of a gasoline engine and tank opens up possibilities by rearranging driver and passenger position, allowing for lane splitting, i.e. driving between cars or have two tangos drive next to each other. Commuter Car’s Tango is one EV that disrupts common designs and constraints of vehicles.