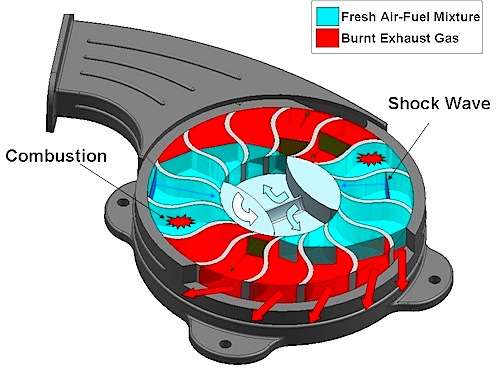 A Circulatory Combustion Engine To Extend Range For Plug-in Hybrids

When the economy takes a turn for the worse, suddenly somnolence is rudely interrupted and engineers and scientists alike are allowed to dive in deeper into revolutionary propulsion systems. A circulatory combustion engine system conceived by Dr. Norbert Müller from the Michigan State University has received the backing from the US Government with a $2.5 million fund. Hat tip GizMag.

Dr. Norbert Müller’s Circular Combustion Engine. It looks like a sundial from ancient Greece but serves an even more practical purpose, that of burning fuel efficiently. Halfway between a turbine and a Wankel rotary engine, this ingenious rotary combustion wheel shows great potentials to extend the range of plug-in hybrids.

Technically Speaking. The spinning metallic disc incorporates precise radial channels where a mixture of fuel and air comes in through the hub. It then travels to the radius, gets compressed, ignited and then released. The ignition spins the wheels, which can be hooked to a generator and power a plug-in hybrid. The expansion of the explosion spins the wheel, which opens the inner channels for the intake and expulsion of gases. Much as a 4-stroke cycle, the exhaust gas is expulsed and once more the mixture of fuel and air is sucked in the channels back for a cycle.

Efficiency At Heart. The efficiency of such as system is due to the fact that it encounters very little resistance and friction. With fewer moving parts than a conventional internal combustion engine, ICE, fuel consumption is typically lower. Dr. Müller’s efficient design reduces fuel economy by 60% with his wave disc design. Add to it a substantially lighter weight and the engine becomes a natural to extend the range of plug-in hybrids.

Although this design lends itself well to other applications, such as portable generators and more, a car version of it producing 33.5hp, 25 kW could be out by the end of the year. The following video of Dr. Müller somewhat explains the design.

While this system is not new per se, it does offer a potential use for future plug-in hybrids. Still, one has to wonder what the efficiency and performance differences are compared to a finely tweaked turbine. In the meantime, we can only welcome engineers and scientists’ uncanny ways of thinking outside the box, bringing us a circular combustion engine that could extend the range of plug-in hybrids.