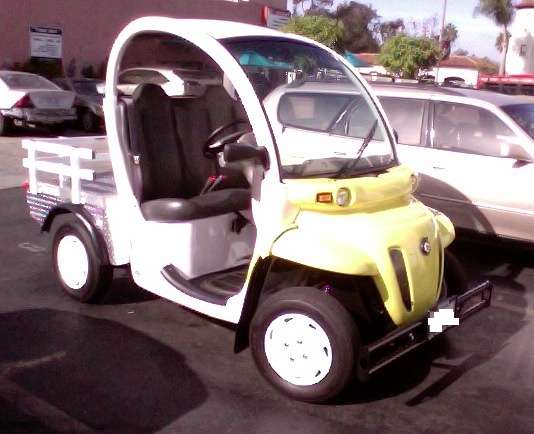 California is looking into a bill that would allow lows speed electric cars on bigger roads. The measure is a one stone, two birds deal for California.
Advertisement

California certainly holds a tender spot in the heart of automobile world where much of the testing, strategizing and design happens and no where is this more apparent than in this state with it insistence on cleaner fuel averages that has riled carmakers. So when we think of electric cars, we think of the Tesla Roadster, or now should I say the highway legal Model S and its healthy range limit. But one thing we rarely talk about are the entry level neighboring electric vehicles, those that can’t be driven 35.

Electric Power Comes In All Shades. There’s raw power, think the latest electric cars and motorcycles, and then there is a locomotion means that happens to use electricity with a decent torque called a low speed electric car. These little gems, pun intended have certainly found a strong taking along the Californian beach community scenery, while the Miles Electric vehicles has swarmed all education campuses. And why not drive for a few pennies on the mile with a very affordable daily driver. The caveat? You can’t go past 35mph. Is that a big deal? Probably more so in the ways you expect than in ways you would.

Politicians Swoop In With An Answer. If too slow is too slow and faster is not affordable, then how about that Medium Speed Electric Vehicles (MSEV)? How’s that for yet another acronym? More to the point, Assembly Bill 225 wouldn't let you drive on freeways with your Medium Speed, oh what is it, that electric urban hopper. What it would do is let you drive on those streets where the speed limit is 45.

If you’re still a little confused, here’s a better worded explanation from Assembly member Brian Nestande via UTSanDiego: "In the past few years, many companies have started building electric vehicles that look like small cars, vans and trucks, but are sold as LSVs (low-speed vehicles) because that is the only classification available," Nestande and Medina said in a joint news release. "However, MSEVs can travel faster than the 25 mph LSV limit, and can be made significantly safer than the open 'golf cart' type vehicle."

So not only it will boost up sales of LSV with more MSV and allow those who already have them now to use those quicker routes in cities. Very smart move Sacremento to make California electric car life better!

ElectricCars.com wrote on February 18, 2013 - 8:56am Permalink
Yea we suggested MSEVs about 12 years ago, shot down because people wanted Hummers. See our Green Streets initiatives in our projects section. This is brilliant. You don't need to move 4500 pounds of steel to go down to your neighborhood shop or 5 miles to work. Now we all know what the bad outcome will be. There will be some fatalities because some of the people driving the suberbian assult vehicles just plain can't see over their dash boards, some of them don't respect full size cars and wipe out innocent families driving all types of cars... but every time a person is injured in a small electric car it will be plastered all over the news... you know "the news" the people who make billions off oil commercials! This is a good step... THERE ARE LITERALLY MILLIONS OF THESE SMALL AND MEDIUM SIZE ELECTRIC CARS BEING SOLD EVERY YEAR AROUND THE WORLD... The USA has fought these but we all know $5, 6, 7 per gallon gas is coming and it will destroy our economies worse than this little "test recession"... Come on California, pave the way for GREEN STREETS (OUR TERM CIRCA 2001) ElectricCars.com
Patrick Rall wrote on February 18, 2013 - 10:09am Permalink
I cannot imagine driving a Gem car on the same roads as a tractor trailer or even a big truck. What would be a fender bender in a normal car would be a fatal accident in a Gem.
Nicolas Zart wrote on February 18, 2013 - 11:21am Permalink
It will be interesting if after that they decide to do GEM lanes...
Aaron Turpen wrote on February 18, 2013 - 12:05pm Permalink
Ya, build a bunch of extra environmentally damaging roadways with money they don't have so that the eight people with GEMs can drive on them and save the planet. That's California logic for ya.
Tre Deuce wrote on February 18, 2013 - 12:58pm Permalink
OK! Boys(Aaron-Nicolas-Patrick), Lets try to be civil and add to the conversation of our dire need to find solutions to our costly transportation regimes . WE need to stratify our transport needs, based on employing minimal impact on the environment and resources. Once again, Nicolas is helping to push this discussion through timely, pertinent information on alternative vehicles that address the needs of now and the future. I'm currently working on a design that would come under the proposed 'MSEV' type vehicle, so find this an encouraging development that will expand the use of town vehicles whether ICE's or EV's. I'm going to Louisiana in a few days to look into investing in, or buying a new vehicle called the 'Elio' that is an all around high MPG 'IC' vehicle. Prefer it be electric, but at a claimed 84 MPG its frugal use of fuel makes it viable...Again stratification of vehicle types and their type of energy use. Thanks for posting Nicolas. Regards too all... Tre
Tre Deuce wrote on February 18, 2013 - 1:40pm Permalink
1948 _ My Dad buys an Austin 'A-40', everybody tells him he is 'going to get killed in that little car'. 1964_ I buy a VW Bug, everybody tells me I'm 'going to get killed in that little car'. Now I daily drive a Miata. We have always had a big difference in vehicle sizes. Today we have Smart cars and 'IQ's, so already we have very small passenger vehicles on all types of roads The key is in Nicolas's article_ "and can be made significantly safer than the open 'golf cart' type vehicle." And _ " Bill 225 wouldn't let you drive on freeways with your 'MS' vehicle." I don't think there is any need to find further accommodation for 'MS' vehicles with dedicated travel lanes. As Aaron says, we don't need to have a further impact on the environment or our resources by building unnecessary lanes of travel. But, denigrating 'California's logic' doesn't further a conversation. So lets review the intent of 'Bill 225' and 'MS' vehicles from an unprejudiced point of view, and not from a predisposed, absolute position. Regards ... Tre
Aaron Turpen wrote on February 19, 2013 - 11:01pm Permalink
The difference between your dad's Astin and your VW and these glorified go-carts.. Your and your dad's cars could go at highway speeds and thus weren't an impediment (and thus safety risk) for traffic. These little cars are kept under 30 mph and will be allowed to travel on 45 mph roadways with big rigs and soccer moms. So claim my making fun of California's lack of logic is bad all you want, but I don't live in a state with $16B+ in debt and where over half the population is paid via taxes. Nor do I live in a state that continually tries to force the other 49 states in the Union to go along with its idiocy.
frank moreno wrote on January 17, 2015 - 3:51am Permalink
Big oil is still killing electric cars by not even allowing them on the market. California Measure AB 225 to make Medium Speed Electric Vehicles legal in California passed the Assembly (May 16, 2013) with no one voting against it.. Then when it got to the Senate they amended the measure and removed any mentioned of electric vehicles and changed the measure to a Mobile homes loan bill. Why was this measure not allowed to become law in California?