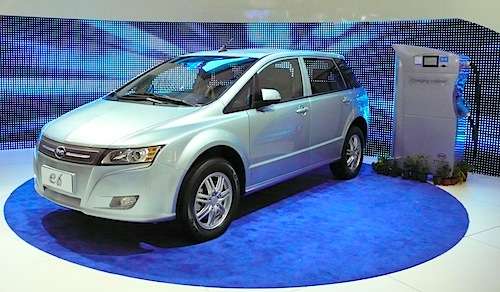 BYD is trying to get its electric vehicles out the door in order to increase its market share. But is zero payment down the way to go?
Advertisement

The idea of selling an expensive product with zero down payment is alluring to companies trying to make a dent in a new market but is also a very dangerous business practice. BYD wants to sell its electric vehicles, the e6 or k9 for no money down. The company has announced a series of financial incentives for customers, according to the China Business News website.

Selling For Nothing. The BYD electric vehicles have appealed to taxi operators and bus companies for their inherently cheaper energy cost. BYD wants to give such companies the opportunity to buy their all-electric e6 or k9 on credit with zero down payment. The program is being offered through the China Development Bank and the China Everbright Bank.

So what is the hoopla? With a high purchasing price, buying an electric car even for fleet operators can be a major hindrance. In China, the E6 costs 180,000 yuan, about $28,811 even after government subsidies. Even though the company claims buying either e6 or k9 is more cost-effective than buying a similar gasoline car in the long run, it’s still a lot of money to put up front for future savings. The company further its argument that the Shenzhen all-electric taxi company saves 326,000 yuan, roughly $52,181 in five years by operating those electric cars. These numbers are compared to the cost of running a similar gasoline car.

BYD’s e6 Test Drive. I had a chance to test drive BYD’s hefty all-electric e6 and my conclusion was that the company has a good start. The electric battery pack is big, all 48 kW/h lithium-ion phosphate, LiFePO4 fits under the floor. Although the company is currently working on different battery pack sizes, ranging from over 60 kW/h to the current 48, the performance are honorable. The total range should be about 205 miles, the 0 to 60 under 14 seconds, and its top speed 87 mph. The ride was promising, although not Earth shattering. In normal mode, you could feel the weight of the car (that was with the biggest pack) and the fans keeping the heat down. But in sport mode, the car became surprisingly zippy, of course with less range.

Zero Down Payment Real Estate Bubble Burst. Does this remind you of an old story? Back in 2003, you could buy houses with zero down payment, zero interest loans and sometimes only pay the interest back, until the principles accrued to astronomical proportions. This contributed to one of the biggest global financial meltdown in our history. While the automobile industry is a different economic platform, it still makes one wonder how such practice would help a car company. Certainly, at least in the near future, this would artificially inflate the sales number but the trick is to recoup that initial lost the following years.

Strength In Numbers. BYD and the Shenzhen taxi operator have a signed a purchase agreement on Sunday for a 150 million yuan, that’s roughly $23,972,767 according to today’s exchange rate. But BYD is also aiming for the Shenzhen's company to buy its bigger rolling stock ever since the taxi company passed its new energy public buses purchase plan. All together, this could potentially generate 1.2 billion yuan in sales, roughly $191,782,135.

With the Chinese local government push for more electric car on the roads, BYD and other electric carmakers in the country are trying to leverage to capture greater market shares. But at what price? The rest of the plan gives little details on how it will recoup the initial financial loss, although we can imagine making the taxi company pay as it starts to make a profit. BYD is backed by the Warren Buffet Berkshire Hathaway investment group, which has already invested a lot in the company. So the question is still valid, would a zero payment down plan work in the US to sell electric cars and how would this work over here where the government is not as eager to help as in China?

No matter how we look at it, there is no magic silver bullet and all situations require a specific strategy. Electric cars promise energy efficiency and long term ROI, especially for fleet owners. It will be interesting to see if BYD can pull of selling its electric vehicles with zero down payment.