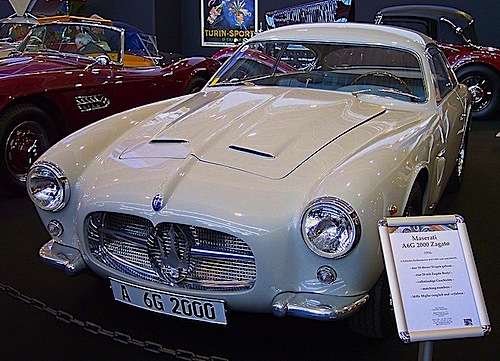 The Best Of France And Italy With Cars

When it comes to fun shows to go see collector cars, the Los Angeles Best of France and Italy ranks very high. See what was shown this year.
Advertisement

The Best of France and Italy is one of those car events where you will you see Facel Vegas, Renault Turbo 2, an endless stream of Alfa Romeos, Lancia, Maserati, Ferrari, Lamborghini with your etceterini in between making ask their owner, what is it exactly. The exotics were here with a Vector.

Renaults, Citroen, Peugeot & Facel Vegas. There is something to be said seeing 5 Turbo 2 lined up on a lawn. These cars were based on the lowly Renault 5, otherwise known here as the Le Car. Needless to say the Le Car wasn’t a performance screamer but it did come in a few versions, including a Gordini and turbo. But the Turbo 2 is in a different world and a league of its own. Renault removed the engine from the front and placed in a central positioned. It didn’t reinvent the wheel but placed a turbo on top of the carburetors and voila... a rally queen was born.

The Citroen crowd showed some truly remarkable cars. Short of the obvious DS, station wagons, and more modern ones, no less than 4 SM were there. I was privilege to drive this unique car a few years ago and found this 1970 highway cruiser would make many of today’s cars look bland with appalling handling. The break pedal is actually a button. The seats flow like in a Maserati Bora and that is because at that time, Citroen had bought ailing Maserati. And the cherry on top is the 2.7/3.0 liter Maserati V6 is what makes this car a pleasure to drive as much as its look. There even was the SM that broke several speed record with its hauling SM and flat truck. It was a spectacle to hear the turbo Maserati turn on.

There was of course most Facel Vegas, a rather unknown car in the U.S. This pretty French body housed a Chrysler V8 which in the late fifties was more than enough to turn heads and thumb your nose at the European roads and policemen on this continent barely recouping from WWII.

Maserati. When I see an old Maserati, I see a sports car. When I see a 60 Maserati, I see a car for the discriminate lawyer and doctor who wants a fast performance car that doesn’t scream or begs for attention. The 50s and 60s were well represented with two A6 that are so intricate in their bodywork, housing that marvelous Italian opera of a straight six cylinders. Of course the Boras were there with a Merak.

On the Lamborghini side of the world, the Uber classic first “real” supercar was here, the Miura with two robed in orange and red. One of my favorite and least understood Lambo was there, the stunning Espada. V12, four leather seats in a clear cockpit makes this the ultimate highways cruiser if you’ve sorted out the car.

Ferrari. On the Ferrari side, the unbeatable Dinos were here and haven’t lost their appeal or charm over the years. Followed by the 308, both of these cars have not put on wrinkles over the decades.

Fiat. Fiat is always well represented with a stunning Moreti, a Fiat Dino Spider and a slew of its late 60s, early 70 street bomb that became amazing racers.

Alfa Romeo. Finally, the brand that takes the lion’s share is Alfa Romeo. From the stunning Giulia SS to GTV, Milano, 164, all spider, early Giulietta in every shape and form were there. We even had a remake of a 6C 3000 CM.

The Best of France and Italy always brings the best from both of these car worlds.