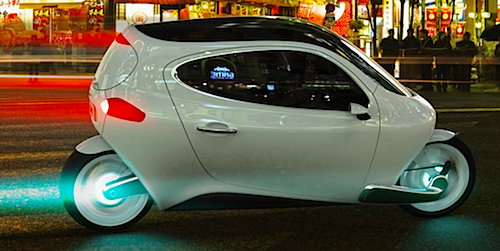 Another Self Balancing Motorcycle

While the idea of a self-balancing electric motorcycle isn’t new, Lit Motors’ C-1 is pushing the idea further.
Advertisement

You might not have heard yet of Lit Motors yet, but if owner President Daniel Kim has its way, a self balancing motorcycle could make its way into your garage within a year. With a tag line as “rekindle the excitement” on its website, what is not to like about an ingenious team of entrepreneurs tackling no less than an electric motorcycle that stands on its own. The designers claim the C-1 is the world’s first gyroscopically stabilized rolling smart phone. It has a trick up its sleeve, it should be able to stand up on its own with the help of electronically-controlled onboard gyroscopes, much as the Segway system does. If the team works out all the kinks, we could see the C-1 in showroom sooner than later.

Technically Speaking. The C-1 prototype is basically an enclosed electric motorcycle. It rests on two gyros and has about 1,300 ft lb of torque. The final version is aiming for a top speed of 120 mph, with a healthy battery range of up to 200 miles. Using in-wheel electric motors producing 40 kw of power, the C-1 also allows for regenerative braking in order to recoup some of the lost energy.

The C-1 sports all the latest goodies you’ve come to expect form an EV, H2V, H2C, V2I, and V2V connectivity, making a smart rolling communication platform. As you drive, traffic, construction, and other weather conditions will be transmitted to the vehicle to inform you and the C-1 about the road situation ahead, advising alternative routes if needed. All of this comes with room for a second passenger. The targeted price of $16,000 makes it a viable alternative for urban and longer traffic.

Design Wise. The design is as you would expect it, sleek, aerodynamic and very energy efficient. Based on a Scandinavian Design concepts, the body envelops the electric motorcycle. This allows for two people to ride inside, motorcycle style, one behind the other.

The first version is more a proof of concept prototype that will take design cues and adapt it for the final version. As with anything rolling and moving, weigh is the number one enemy and keeping it down is crucial to its eventual success.

The company is also working on a cargo scooter, but won’t reveal much about it yet. It makes sense to tackle the light city cargo that so far is mostly done with small cars.