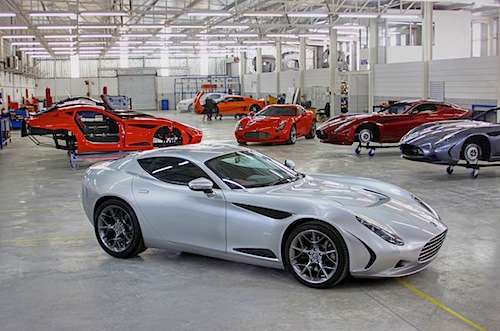 An AC Cars 378 British Coupe In An Italian Zagato Dress

When it comes to coupes with character, the British world has given us a few surprises and none of them were more pleasing than when they sported an Italian coachwork. AC Cars was behind the iconic AC Cobras, and later Cobras Caroll Shelby made famous. Now the company rekindled with its glorious past by working with famed Italian designer, Zagato.

A Little History. AC Cars, formerly known as Auto Carriers Ltd., was a small British company manufacturing small cars at a small rate until the larger than live Caroll Shelby stepped into its life. While its history starts 1903, it wasn’t until its iconic mid-50s AC ACE, otherwise known as Not-A-Cobra to aficionados that the little company garnered international interest. In 1962, Caroll Shelby seduced the company who then fit a small block V8 in it turning it an AC Cobra, then simply a Cobra and history was made. The Cobra was meant as a competitor to the Corvettes in the US and is still made in the same traditional form by many companies. Today AC has been renamed AC Cars by its new owners, Gullwing GmbH with its headquarters in Germany.

AC And Zagato. AC and Zagato have had a brief relationship in the past when the AC Ace Zagato of 1957 was made. AC also worked with another Italian coach maker, Frua with their AC Frua from 1965 to 1973. The company realized they needed a real GT tourer and simply used a Ford stretched six-inch Cobra 427 Chassis driven by a Ford FE 428 V8 pushing 400 hp under striking body. Fast forward today and you have the jaw dropping Zagato AC 378, rekindling both its heritage and passion in the British coupe tradition.

As far as Zagato, what can we say. Long associated with Alfa Romeo, Ferrari, Aston Martin, to name a few, the company has been busy these last years. Indeed, after just showing its stunning Aston Martin V12 Zagato in February, the venerable company showed a striking Alfa Romeo iteration of the amazing TZ2, the 2011 Alfa Romeo TZ3 Stradale. In 2009 it showed a Bentley GTZ, and in 2003 yet another Aston Martin, the AR1.

Technically Speaking. This isn’t your classic AC, more of an upgraded Frua. While the car started its life back in 2009 as a Zagato Perana concept, current owner Al Lubinsky wanted this AC 378 GT Zagato to prove the company is still here and still making performance cars. The AC 378 GT Zagato uses a carbon composite body on a steel tube frame. The under pinning is a large GM 6.2 L V8 engine cranking out a respectable 434 hp. This is enough to make the AC sprint the 0 to 60 in less than 4 seconds. The company announced a top speed of 185 mph. The AC 378 GT Zagato should have no problem keeping up with other top notch cars, releasing its fare share of adrenaline while turning heads.

With a 50/50 front and rear weight balance, a very favorable power to weight ratio, should make the handling much fun. Its weight curb is also impressive with shy of 3,230 lbs, explaining the overall performance. The AC 378 GT Zagato is available to order with manual transmission, and comes both in right hand drive form for the UK market, as well as left hand drive for the rest of the market.

Aesthetically Speaking. The car is breath taking with amazing lines. To sum up Zagato’s design philosophy, the AC 378 GT Zagato incorporates the key attributes of simple, light and aerodynamic. The car keeps some of the AC characteristics alive but adds that certain Zagato je ne sais quoi. While the car screams performance it keeps gorgeous sensual lines inviting you to rekindle that American engine, British coupe with an Italian body beauty.

At around $144,970, this limited edition run is well priced. To sweeten the deal, a even more tantalizing roadster version is in the works. The cars will start deliveries around the middle of 2012.

All in all, it’s Nice to see AC Cars back with a vengeance. The Zagato stunning body is everything you would hope from the famed Italian coach maker. We hope to catch a glimpse of what looks to be an instant collector item, the Zagato AC 378 GT.

Aaron Turpen wrote on March 15, 2012 - 4:26pm Permalink
That's awesome. AC has had a design symmetry that began with the Ace and that they've stayed true to ever since. A beautiful 1:1 that splits the front from the rear with the windshield as the line. Perfect.
Nicolas Zart wrote on March 16, 2012 - 12:56pm Permalink
I agree, this one is a winner. Superb lines, looks very promising on paper and should have no problems servicing that engine here.