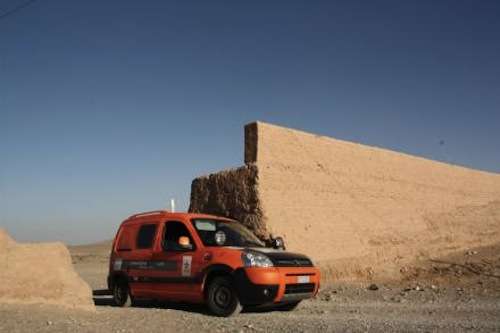 3,600 Miles on Electricity in Africa Come to an End

The Venturi challenges are both impressive and a technological feat, the last one having achieved 3,600 miles in an electric car in Africa.
Advertisement

It’s official, Xavier Chevrin the courageous electric car, EV challenger who has taken on some incredible trips on this planet has completed his cross-country EV run through Africa in an electric Citroen Berlingo. In our original story, we wrote about how Xavier and his photography and video co-pilot Vivien Floris started it in Nairobe, Kenya and has since covered 6 countries driving over 3,603 miles, of which 372 were on rough terrain. After a few broken parts and even a broken leg, the Frenchmen have ended their 38-day trip.

The Trip. According to Xavier, the drive took him through rough terrain, including: “…mud (it was the end of the rain season), stony paths, lots of sand and dust. But the car stood up to everything very well. Venturi has just proven that electrical technology can adapt to all terrains in Africa, thus opening up the path to new economic and environmental prospects on this continent." The biggest problem he concluded was convincing the locals to top off the battery pack in order to facilitate his drive and achieve better range management.

Charging Technical Challenges. The other challenge was figuring out and making sure the current intensities were correct so as to not blow up the converters and other electric components in the EV. Another challenge came in the different wiring color schemes they encountered that had to be carefully tested before juicing up. None of these stood in the way from recharging the 70.5 kWh nickel sodium chloride battery pack during the trip. Then one day, while trying to disconnect the cabling on a shed roof in Zambia, Xavier fell through and broke his left foot. Luckily, his driving right foot was not damaged. The last challenge was when two battery chargers blew up at night in the Okavango Delta. The crew still managed to repair them and were on their way to South Africa shortly after.

Here’s a short video clip that will give you a better idea of what the team had to go through.

If the first 3 Venturi challenges were more technical and proving that electric cars do work and can go the distance, this fourth iteration challenged a more sociological aspect, that of engaging people. The most difficult human challenge was to reassure people that recharging their battery pack wouldn’t harm their electric installations.

All in all, it’s good to see these challenges pushing men, machine and technology to achieve more and more. Venturi challenges are proving to be technological accomplishments showing that current technology, as in this case with a modified Citroen Berlingo and its beefed up nickel sodium chloride battery pack can go the distance.