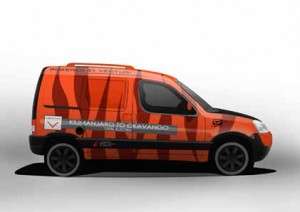 3,000 Miles In Africa On Electricity

The Odyssey has begun as Xavier Chevrin tackles yet another daring project, this time to cross 3,000 miles in the heart of Africa with an electric car.
Advertisement

Xavier Chevrin is no stranger to stretching electric car range with his multiple adventures. He rode an electric scooter from Paris, France to Almaty in Kazakhstan in 2008. As if that wasn’t enough, two years later he then decided to set the record for the longest distance traveled in an electric vehicle by taking a Venturi-powered electric Citroën Berlingo van from Shanghai in China to Paris. The 8,326 miles escapade according to sources cost less than $200 dollars for the whole trip. So why not tackle an African adventure from Nairobi to Johannesburg, a mere distance of slightly under 3,000 miles covered in about six weeks. Xavier will charge the vehicle along the way, discovering the local sites along the way.

The Fourth Venturi Global Challenge. The fourth Venturi Global Challenge is not a simple one. Each one building on top of ever increasing stakes, this one adds a new dimension. According to Venturi's President Gildo Pallanca Pastor: “This fourth opus is a new challenge for Venturi with a particular feature; that of combining the pioneering spirit with a human adventure, in contact with different populations who will discover an electric vehicle for the very first time, and all the magic that surrounds this silent means of propulsion," "An adventure which also embodies our desire to demonstrate that the electric vehicle is an alternative to the combustion engine all over the world, from Shanghai to Paris, Nairobi to Johannesburg and, tomorrow, in the Antarctic."

Rare Electricity In Africa. The challenge is humongous. 65% of Africans have no electricity and relying heavily on luck to charge the Electric Vehicle's batteries through Kenya, Tanzania, Zambia, Zimbabwe, Botswana and South Africa is a colossal task. Using nothing more than an electric Berlingo, the same used by the French Postal Service, it will rely on extra battery storage to squeeze more range out of it. Sporting a 21kW electric motor with bursts up to 42kW asynchronous three-phase electric motor, it delivers 132.76 ft lb of torque and giving a top speed of 68 mph.

Powered by three 23.5 kWh nickel sodium chloride batteries, the pack gives the vehicle a range of up to 310.6 miles. Of course, the suspension has been raised. A full recharge can take up to 7 hours on a standard 220V/16A plug. He could get up to 80% capacity in 5 hours.

The only problem Xavier has found so far is that local law enforcement is stopping him whenever they can. He is not breaking any laws, they are just curious. Imagine if the entire African continent said no to petroleum? In the meantime, we can only congratulate Xavier Chevrin and Venturi for putting on this daring challenge that pushes the relevance of Electric Cars.

Don Bain wrote on May 31, 2012 - 1:48pm Permalink
Amazing to think this is being attempted with no alternative back-up whatsoever. Not even a small solar panel if all else fails!!!