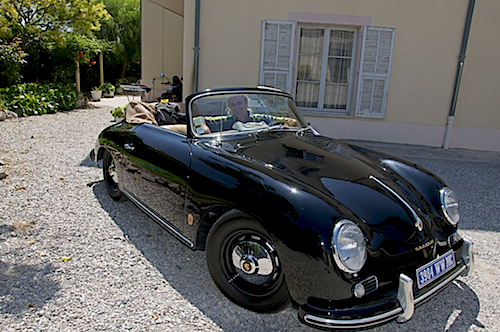 Choosing between a new and old car can be difficult and really depends on who, what, when and where. Today I drove 356A Porsche in Nice, France and still wonder if what new cars offer really makes them better.
Advertisement

Modern cars have come a long way. As much comfort they offer, security is really where they excel. Modern tires are head and shoulders above the ones we had in the 60s, and brakes have gotten lighter, stronger and more resistant. But somewhere along this long way, modern have traded a lot for these gains. With an increase security comes a heavier weight. Although traditional gasoline engines have gotten more efficient, the extra weight penalizes their progression. And in the end, we are left to wonder, what have modern cars to offer compared to older ones?

Old vs. New. During my stay in Nice, France where I enjoy rediscovering my driving stomping grounds, my cousin offered me to drive his mid-1950s 356A Porsche. Hot weather, beautiful stunning Nice and an old car are my idea of heaven, so I jumped in. As a reference to Porsche, the most modern 911 I drove was a 1983 and the most modern was the Alfa Romeo 8C Competizione, as far as gas cars are concerned. Although both different, they each represent the best each company had to offer at their time of production.

Light, Nimbler 356. The 356A is light and highly nimble. It’s not a VW Beetle on steroids. It is truly a Porsche, the beginning of a legend. This black item is stock and has been treated to a fairly high-level of quality restoration. The Clutch is typical of those years, a little long but smooth enough to launch the car forward without much hiccups. The little 1600 is sprightly. It shows plenty of will and capacity to rev up, yet remains highly tractable at any rpm, traffic or open roads. The gearbox selector is a little out of the way, contrasting highly with the perfectly positioned Alfa Romeo of its time. The steering is direct and fairly precise and the drum brakes mean you will respect a healthy distance from modern day drivers. With all of this, it handles exactly how you would expect it to, precisely well.

Big Sister 911. Compared to its big 911 sister, the 356 is a blast to drive at almost any speed. Its lightness makes it almost unforgiving. A 911, although much more capable in handling and raw performance commands a little more respect. I was more relaxed driving the more expensive 356 in the middle of the French Riviera’s gruesome summer traffic than I was in a 911 in Los Angeles.

Stratospheric Alfa Romeo 8C Competizione. On the other end of the spectrum the 8C Competizione also felt like an albatross. Almost clumsy at slow speed it quickly razor sharp and easy to throw in fast corners at higher speed.

With all of this said and done, what do modern cars offer than older cars and at what price. I guess it all boils down to tastes and needs. I love old cars and modern electric technology, and since we have no children, I can afford to drive old performance cars. Even if a more modern 911 is highly reliable and greatly improved in the handling department, I still can’t shake the feeling that a 356 was a perfect car, especially for its era. The 911 felt more like a precision bullet that commanded concentration. I had no problems throwing either one in corner, but the 356 was more fun, although less technical. Compared to the 8C Competizione, the 356 feels more like a toy and a fun one at that. The 8C Competizione, although perfect for cruising and with enough to awaken any adrenaline junky felt like a bigger more modern car.

In the end, nothing replaces the simplicity of older cars. Their lightweight, coupled to a superb handling and yes, not-so-precise brakes is still more fun than most modern cars. Just don’t get into an accident, this is probably the only domain where modern cars beat their older siblings. Modern cars also offer one very important advantage, they pollute much, much less. All in all, the Porsche 356A was a blast to drive, considering it is 67 years old in the middle of the French Riviera where it belongs.