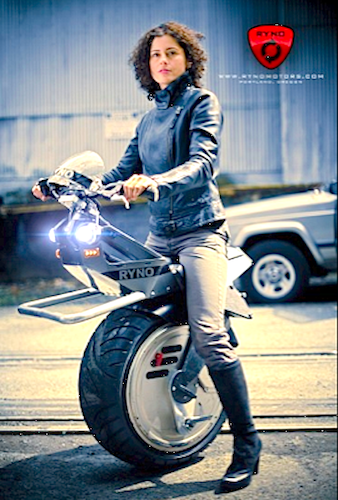 30 Miles On One Electric Wheel with a RYNO

If the Segway leaves you feeling ho hum then maybe traveling on an electric one wheel RYNO would spark your interest.
Advertisement

The RYNO sure is a looker, and its balancing feast on one wheel is intriguing enough to make you want to try one. Before the objections start flying, let’s see what the possibilities an electric one wheel has to offer.

RYNO’s mission is to offer cost competitive, energy efficient, personal transportation products for consumer within their communities, to go to work, done in a highly efficient manner. Its first product is a one wheel electric vehicle it calls a Micro-Cycle, not a scooter. It makes sense when you realize the company is based in Portland, Oregon, a city that rightfully prides itself on its amazing transportation services. In case it looks familiar, you might have seen it on the 7th episode of season 2 in Portlandia… where else?

How Does It Work? Using what RYNO calls an Auto Balance System, the mechanism is designed to first warn the user she or he is approaching the limit of the vehicle. If the warnings are not heeded, it will temporarily bring back the NEV under controlled balance until it can be released back it to its owner. In other words, before you reach dangerous limits, the RYNO will re-stabilize itself before you end up somewhere beside its seat. We can already imagine tweaks to turn off the system and race them.

Technically Speaking. With a top speed of 25 mph and a range of about 30 miles, this neighborhood electric vehicle, NEV is obviously intended for short distances, such as commutes from home to the train stations or your local business. While the company doesn’t liken it to scooters, it does boast better maneuverability. As intriguing as it might seem, maneuvering the electric one wheel is easier than you would imagine. Depending on how well you master it, its turning radius can go from turn on itself to three feet in diameter.

Weighing in at 125 Lbs, it sports a lithium-iron-phosphate battery pack that can be recharged in as little as an hour and a half. This allows this unique EV to confront inclines of up to 30%. Just lean forward.

If exclusivity is your name, RYNO has you covered with 50 hand-built limited edition that can be had for $25,000 with a deposit of $6,000. The production version should ready for sale soon, within the next few months at an estimated price of $4,200.

Why Is It So Interesting? The one good news about the global economic recession is that it has finally sparked innovations again, something our country was famous for. No one would have seriously thought of a one wheel electric wonder a decade ago, but today’s market offers it a chance for such disruptive means of transportation. While the concept of in-hub electric motors is not new, it has a future in the electric transportation platform. And for those of you with good enough memory, the famous Swiss car designer Sbarro had worked on equally intriguing concepts using hubless wheels, which would fit in well with the electric drivetrain. One thing is for sure, I will test ride one and so far, want to buy one.

Toyota's First EV Will Have a Name of BZ: Toyota BZ
First Videos From Inside The Boring Company's Las Vegas Loop
END_OF_DOCUMENT_TOKEN_TO_BE_REPLACED