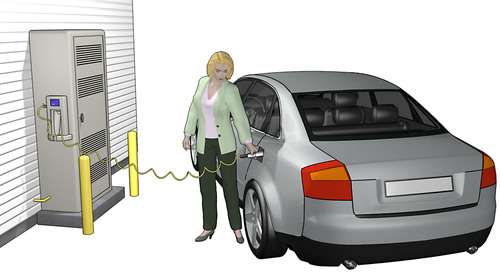 Will there be a natural gas vehicle revolution due to low cost CNG refueling station from GE?

GE is developing a quick fueling system for natural gas vehicles as part of an ARPA-E funded group of thirteen projects to improve natural gas fueling, that could begin to make CNG vehicles attractive to the average consumer.
Advertisement

Natural gas is cheap and abundant thanks to the controversial technique, hydraulic fracturing (a.k.a. fracking) that has led to a boom in natural gas production. While use of natural gas increases greenhouse gas emissions, and desequesters carbon that was sequestered millions of years ago, it is thought to be cleaner than gasoline or diesel. The problem with natural gas adoption is a lack of refueling infrastructure for public, and those of us with electric cars have it good compared to the infrastructure for natural gas vehicles (NGV). General Electric is looking to fix that problem with a new at-home refueling station for natural gas vehicles being developed in part with government funding through ARPA-E.

The GE project is part of a larger group of ARPA-E projects which are collectively known as Methane Opportunities for Vehicular Energy (MOVE). The bakers dozen (13) of MOVE projects are to receive a total of $30 million in funding, and are expected to find new ways of harnessing the now abundant natural gas supplies for cars and trucks and expand the use of natural gas as a vehicle fuel.

The GE program has a target of a $500 refueling station that cuts the time required from 5-8 hours to 1 hour. The project is a partnership between GE, Chart Industries, and scientists with the University of Missouri.

In automobiles the only natural gas car available on the market is the 2012 Honda Civic Natural Gas Special. It has a fuel efficiency of 27 city 38 highway MPG (equivalent), and has a driving range of under 300 miles. The base price is $26,305, while the base price of a normal Civic Sedan is $15,955. But unlike the networks of electric car charging stations being built now, public charging stations for natural gas vehicles are few and far between, and exist primarily for fleet operators. Despite the fact that natural gas already has a mature distribution network, the delivery of natural gas for stoves or water heaters is not at the high pressures required to fuel a natural gas vehicle.

Refueling stations meant for home use do exist, but are expensive ($5000 or so) and require a long refueling period. The 5-8 hours to refuel a natural gas vehicle is similar to the recharging time for electric vehicles. Where some electric cars have fast charging capability, natural gas vehicles do not. That is, not until GE's research project is completed. The GE technology will work by chilling and densifying natural gas, to more quickly transfer it into a fuel tank. The system is expected to have few moving parts, operate quietly, and to be virtually maintenance free.

The ARPA-E MOVE projects taken as a whole are focusing on two goals improving natural gas storage, and natural gas compressor designs for improved natural gas refueling. Taken together this is all about improving the refueling experience for natural gas vehicle drivers.

The GE project is expected to require 28 months to develop the technology, with GE researchers focusing on overall system design integration.

One or more of these projects could manage to vastly improve natural gas fueling, making it possible for regular consumers to use CNG cars. That could result in the automakers increasing the number of CNG vehicles on the market. If so, the future CNG vehicle owners would enjoy effectively lower fuel prices. Today's natural gas prices is equivalent to $14 per barrel of fossil oil, which would mean a cost per gallon gasoline equivalent much less than today's gasoline prices.

Anonymous wrote on July 19, 2012 - 7:14pm Permalink
This article suggests that NGVs cannot currently be filled quickly. This is true of home filling dispensers but not of public filling stations. It takes about 5min to fill a Honda Civic CNG at a public CNG filling station. Why? Because at the public filling station, the gas is already compressed to 3600psi; the customer is merely transferring it to the vehicle. By contrast, at home, with a 'time fill' cascade compressor, one begins with low pressure city gas, and compresses on the spot to the 3600psi required. It therefore takes much longer to fill the tank. It is unlikely that many people will want to purchase compressors. But it is nearly certain that diesel trucks will be switching en mass to CNG. This is beginning to drive the construction of public stations, and once those stations are in place, owners of private cars will follow. Oil is too useful and too expensive to be used for transport when a much cheaper alternative is available.