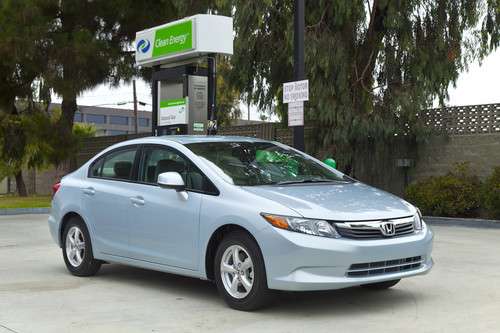 Catching the wave of California's spike in gasoline prices, Honda is promoting the Honda Civic CNG with $3,000 worth of free fuel.
Advertisement

Some alternate fuels have more stable prices than gasoline prices. The price for electricity and natural gas is primarily set by utility commissions rather than a manipulable supposedly free market. Electric vehicle owners, like this writer, could be blissfully unaware of the occasional wild swings in gasoline prices. Additionally both electricity and natural gas are cheaper fuels than gasoline, most of the time. Last winter we calculated the electric car cost per gallon equivalent to be between $0.75 to $1.05 per gallon, if the electric car is charged at home, at the national average of $0.11 per kilowatt-hour. Honda claims the national average for compressed natural gas refueling in July was $2.05 per equivalent gasoline gallon.

Claiming this is a way to "[fight] back against a spike in gasoline prices" Honda has announced a partnership with Clean Energy Fuels Corp. to provide special savings of the 2012 Honda Civic CNG. The savings is a debit card pre-loaded with $3000 that can be used at Clean Energy Fuels CNG filling stations. To get the $3,000 worth of free CNG, customers must purchase a Honda Civic CNG from a participating Honda CNG dealer before January 2, 2013. The fine print does say that supplies are limited.

Supposedly natural gas is a "clean fuel" even though it is a fossil fuel and its use contributes to increased carbon in the atmosphere. The 2012 Honda Civic CNG was named "2012 Green Car of the Year" by Green Car Journal, and one of the "greenest vehicles of 2012" by the American Council for an Energy-Efficient Economy (ACEEE).

CNG vehicles have a worse refueling problem than do electric cars, because of the scarcity of CNG refueling stations. The company, Clean Energy Fuels, boasts on its website that they are "Building America's Natural Gas Highway," and their station locator shows stations located across the country.

"With gas prices spiking in California, Civic Natural Gas vehicles sales at an all time high, and the public gaining greater awareness of the benefits of using natural gas, we believe this a great time to launch our fuel card promotion with our partner Clean Energy." said Steve Center, vice president of the American Honda Environmental Business Development Office. "If you're looking to save money at the pump, spend less time in traffic, and reduce your environmental impact, the 2012 Civic Natural Gas Vehicle is a great choice."