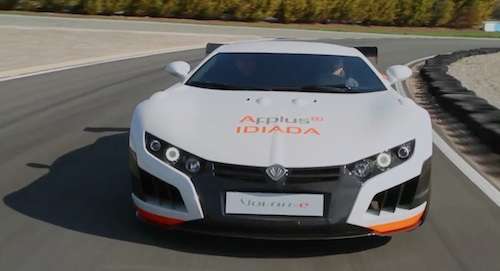 Instant torque at 0 RPM can, if packaged right, make for a wicked fast race car. In late 2012 Applus+IDIADA won a contract to build a high performance electric race car, and four months later they demonstrated that car at the Circuit de Catalunya during the F1 Test Days. Take the supercar shape dreamed of by adolescent boys around the world, give it four electric motors totaling 1000 horsepower, variable torque vectoring, and much more, and that's what you have in Applus' VOLAR-E.

The spec's of the car are 1000 horsepower (750 kilowatts) and 1000 nM of torque. It sports four electric motors, and it has a torque vectoring system to independently control the power to each motor depending on the needs of the moment. The battery pack is 38 kilowatt-hours, making it about 1.5x the size of typical electric car battery packs such as in the Nissan Leaf or Ford Focus Electric. The battery pack is made from lithium iron phosphate modules built by Rimac. These are 20S3P modules, meaning each module is 60 cells, connected in groups of 3 parallel cells for 20 in series. The whole pack is ten of these 64 volt modules for 640 volts in total.

Surrounding all this is a lightweight carbon-fiber frame. According to a statement made by Applus in October 2012, the VOLAR-E will also "incorporate the latest developments in vehicle to vehicle and vehicle to infrastructure communication systems, as well as a user interface based on new applications designed for current and future smartphones."

As for speed the VOLAR-E tops out at an electronically governed 186 miles/hr and has a 0-60 time of 3.4 seconds. It has four driving modes, and they aren't described as "fast," "extra fast," "super fast," and "wicked fast," but instead: Eco, Dynamic, Racing and Wet

Applus doesn't give an estimated driving range but with such a fast car the estimated driving range using the normal test procedures wouldn't be very useful anyway. What would be more useful to know is the number of laps this car could run on a charge, to get a feel for how it would perform in a regular race. The video does claim a fast 15 minute recharge time thanks to a proprietary DC fast charge system.

For anyone who's counting, these spec's beat those of the McLaren P1 plug-in hybrid supercar that were revealed last week.

Going by comments on the YouTube video there may be a little controversy over the pedigree of the VOLAR-E. Was it indeed built by Applus, or is it actually a Rimac Concept One in disguise? That electric supercar also has four electric motors with torque vectoring, but at a slightly higher power level, slightly higher top speed, slightly faster 0-60 times, a DC fast charging system, etc. All very similar, and the two cars look very similar. The biggest difference is the Rimac Concept One has a battery pack 3 times as large for a 600 kilometer driving range.

While the Applus press release doesn't mention Rimac, and Rimac doesn't appear to have issued a press release of their own, there are a couple factoids supporting the idea that Rimac at least played a huge hand in developing the VOLAR-E. First, there is no chance that Applus could have developed such a car in four months, they had to have had some help. Second, postings they made on Facebook show a Rimac logo on the wall of the workshop, and that the battery modules were built by Rimac. Third, the specs for the VOLAR-E and Concept One are suspiciously similar.

On the other hand Applus has posted a couple dozen other videos showing electric vehicle technology developments. These include a September 2012 video going over their iTORQ torque vectoring system for electric cars with four electric motors. That video predates having won the contract to develop the VOLAR-E.

While it's fairly clear Rimac provided drive train components and engineering expertise to Applus in developing the VOLAR-E, Applus had their own technology to bring to the vehicle as well.

According to the company's press release in October, the goal for the VOLAR-E is to "help overcome the current technological and social barriers of electric cars and promote acceptance of electric vehicle technology by the public and the mass introduction of this type of vehicle into our society." How would a super fast sports car accomplish this? What about the stereotype that electric vehicles can only be slow boring ugly golf carts? The European Union seems to have wanted a super-fast electric car to parade around Europe with which to explode the stereotypes.