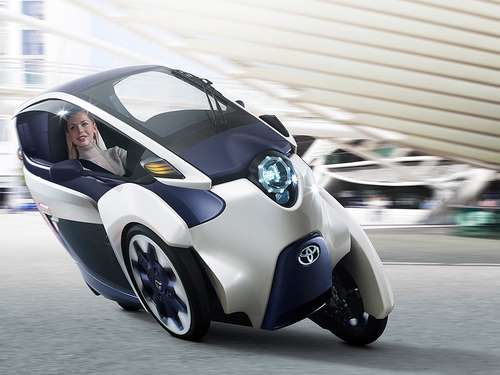 Toyota is unveiling the iRoad Personal Mobility Concept vehicle at the 2013 Geneva Motor Show. The Toyota iRoad is an ultra compact electric three wheeler "car" with the maneuverability of a motorcycle. However while the vehicle has the looks of a sleek, modern, fast vehicle, its' speed matches the typical low-end scooter.

Compact three wheelers of this sort are best suited to compact urban spaces where parking is tight, and skinny vehicles like motorcycles can slide through gridlock. The iRoad is specified with a width of 800 milimeters (35 inches), and going by the pictures will have a track width wider than typical two wheeled motorcycles. By comparison the Piaggio MP3 250 has a 29 inch width. Split-laning could be difficult with the iRoad.

The iRoad is built to what's called a "Reverse Trike" design where there are two wheels in front, one in the rear. It has many of the advantages of a motorcycle like maneuverability, while giving some much needed stability to improve safety. The iRoad offers an enclosed cabin allowing two people to sit in tandem (one behind the other). The closest similar vehicle to the Toyota iRoad is the Arcimoto SRK, also a three wheeled electric vehicle. Technically, because it has three wheels, the iRoad will be considered a motorcycle, but the enclosed cabin will effectively make it a car.

Where the iRoad concept falls down is in its performance. It has two 2 kilowatt electric motors which is barely more power than the low end of electric scooters. As a result the iRoad has a maximum speed of 45 kilometers/hr (30 miles/hr) which make it only suitable for around-town travel. With that low of a top speed it won't even work well on 50 miles/hr expressways.

This sort of vehicle has the potential to change urban traffic patterns. It's small size and light weight is extremely compatible with the coming needs of drivers in urban areas who are facing ever-bigger gridlock and parking challenges. But widespread customer adoption will mean a faster top speed to enable it to travel on at least the 50 miles/hr expressways.