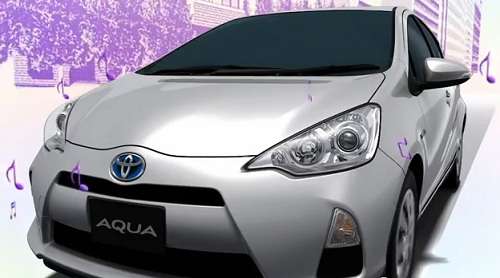 This week at the Tokyo Auto Show, Toyota took the wraps off its Aqua concept, revealing what, in the U.S., will be called the Prius C.
Advertisement

Toyota Aqua is essentially a compact four-door, four-seater, hatchback with a new smaller version of their Hybrid Synergy Drive system. It's a more compact, and perhaps less expensive, version of the Prius, and is expected to get at least 50 miles/gallon fuel efficiency in the American model. The Japanese model is reported to get 80 miles/gallon or more efficiency, under the less stringent Japanese testing system.

The car is about the same size as the Toyota Yaris, with a 100 inch (2550mm) wheelbase and 157.9 inch (3995mm) overall length, making the wheelbase 6 inches shorter, and the total length almost 2 feet shorter than the 2012 Prius. This is also smaller than the 2012 Honda Insight, whose dimensions are nearly identical to the 2012 Prius. One tradeoff as a compact car is the engine size. The Aqua has a 1.5 liter DOHC four cylinder engine, versus the 1.8 liter engine in the larger Prius models. The smaller engine and vehicle size surely is where they found the added fuel efficiency, but this also means less horsepower. We haven't seen a statement from Toyota on this, but some sources say the gas engine will produce 72 bhp versus the 98 bhp engine in the full-size Prius, and the electric motor is expected to produce 60 bhp versus the 80 hp motor in the full-size Prius. We will have to see whether or not this will affect acceleration.

Toyota wants us to think the 'C' stands for City, but we also could take it to mean Compact. This small car should flit about in crowded cities very easily. The hatchback style rear end is taller than the normal Prius, which should give an appreciated improved visibility out the rear window.

A video released along with the Aqua features a bouncy hip sound track and animation style implying plans to reach out to a younger market with this car. Mobile device connectivity and music features are important in that segment, and Toyota's Entune infotainment system is their answer. Pictures released by Toyota show a 6 or 7 inch touch screen in the center of the dashboard, in the place of what would normally be the in-dash stereo system. Entune features a full range of modern capabilities including SiriusXM satellite radio, a backup camera display, USB port for iPod connectivity, hands-free phone capability, Bluetooth, audio controls in the steering wheel, a multimedia system, phone book access, voice recognition, text-speech and more. This leverages smartphone's to connect navigation, entertainment and real time weather, traffic and fuel information. Some of these features are options in the full-size Prius, and likely will be options in the Prius C.

Toyota Motor Corporation said in a statement, “As with other Prius models, Prius C combines its revolutionary Hybrid Synergy Drive with excellent aerodynamics to achieve outstanding fuel efficiency. The Prius C is unique in the Prius Family with a more youthful expression and a sportier dynamic character that offers a more fun-to-drive experience. The vehicle’s five-door format and flexible packaging will adapt to a broad range of owners’ needs”.

Toyota Aqua is expected to go on sale in Japan in late December, 2011 and will eventually be sold in the U.S. as the Prius C.