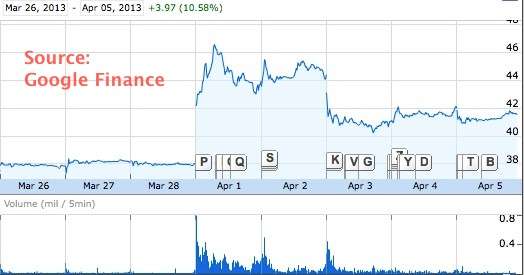 Whether the price for Tesla Motors stock has fallen or risen this week depends on how broad of a horizon one sees.
Advertisement

Tesla's stock (TSLA) has been on a roller coaster ride following two announcements earlier this week. While the price is up by about $4 since this time last week, TSLA's price is down by over $4 from the intra-week high. In between the company announced it expects to record its first-ever profit for Q1, and announced a new lend-lease deal for Model S purchases promising to reduce the cost of owning a Model S.

In many ways the stock market is a big guessing game where investors are trying to predict the future sales and profit of the companies on the market. For a start-up company like TSLA, that doesn't have profit, the normal valuation models would leave a profit-less company with a tiny stock price. Instead investors bid the price up or down based on hopes or dashed hopes for the future prospects of profitability.

This week Tesla made two announcements that demonstrate these cycles of hopes and dashed hopes, with the stock market responding appropriately.

The first announcement came on Sunday evening and was reported widely on Monday - Tesla Motors expecting first ever profit after steep losses in 2012. This may end years of of losses at the company as it rapidly shifts into the mode of selling automobiles to customers. All through 2012 Elon Musk had predicted Tesla would be profitable this quarter, and with brisk sales (Tesla Model S deliveries over 500 per week, with over 12 million electric miles driven) his prediction seems like it's a sure thing.

On Monday morning TSLA gapped upward to open at about $42.55 after closing at about $38.00 on Friday. TSLA's price kept climbing during the day hitting a high of about $46.44 on Monday.

Then on Tuesday came the announcement of the lend-lease offer for Tesla Model S's (Tesla Motors adds amazing $500ish/month Model S financing offer). That announcement was made at 2:00 PM PDT, or after the markets closed.

On Wednesday morning the TSLA price gapped downward to open at about $42 after closing at about $44 on Tuesday. While the lend-lease deal announcement sounded positive, that it would help to make the Model S more affordable, once people pulled out their calculators and started crunching numbers the savings potential looked like hype (Tesla ownership calculator does not add up).

One announcement that did not affect TSLA's price is the Detroit Electric unveiling of an electric sports car that looks eerily like the Tesla Roadster (Detroit Electric's new SP:01 electric roadster looks very much like an EV we have seen before). The reason it looks like so much like the Roadster is that both are built on the Lotus Elise chassis.

Some portraying this as "Tesla's stock price is down because of the lend-lease announcement." However in the slightly broader picture, the TSLA price is up about $4 since last week, and in the even broader picture the stock price for companies like Tesla bounce up and down on the latest piece of hype.