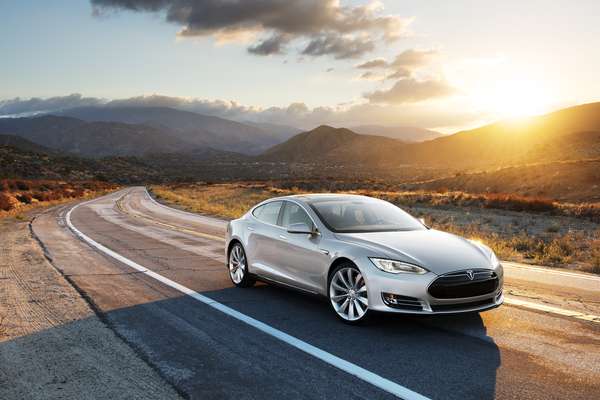 The first prototype version of Tesla Motors' Gen3 car, the affordable mass market electric car, should be shown to the public in the first quarter 2015, according to Elon Musk.
Advertisement

Tesla Motors' long-term plan is to develop an affordable mass market electric car with a target price of $35,000 US, and manufactured in volumes around 200,000 a year. Speaking at an event in Germany this week, Tesla CEO Elon Musk said the "first prototype" would be available in 12-18 months.

The event was a public meeting connected with this weeks announcement of Tesla's focus on winning big in Germany. While answering questions, Musk largely talked about the announcements made earlier this week, and spent a few minutes talking about the Gen3 Tesla. The name of that car has not been announced, but many call it the "Model E". It will be the 3rd generation of Tesla's automobile efforts, where the Roadster was the first generation, and the Model S and Model X the second generation.

That car will have an electric driving range of about 200 miles and will not be quite as feature-filled as the Model S. The Model S and Model X target the luxury car class, and have top-notch fit-and-finish and features. The affordable Gen3 Tesla is going to come in at a much lower price, $35,000, than the Model S, whose starting price is around $70,000. Presumably by 2017, when that car is slated to go into production, battery prices will have fallen enough so Tesla can afford to sell the Gen3 car at that price. But, according to Musk, the car will also incorporate other changes to reduce the cost so they can offer it at a lower price. For example, instead of two dashboard screens they might have just one.

As for the timeline, Musk said the first prototype of the Gen3 car would be "about a year from now" or "12-18 months" from now. At the outside that means it will be viewable in the early Spring of 2015.

Currently, according to Musk, the Gen3 at is at the drawing stage, meaning that it is just sketches on a drawing board. In a few months they'll get to the clay model stage.

During the conversation (see video below) Musk also projected Model S sales in Germany would top 1200 a month. That would make Germany their second largest market, behind the US, and on a per-capita basis sales penetration in Germany would be much higher than in the US.