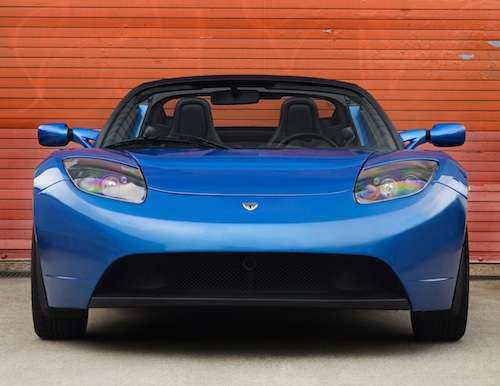 Reports are circulating claiming a Tesla Roadster design flaw can destroy the battery pack, at a large cost to the owner. Tesla dismisses the problem, saying they've designed in safeguards to prevent it from happening.
Advertisement

Last night a blog post by blogger Michael DeGusta (reposted by Jalopnik) went into great detail explaining how several Tesla Roadsters were made into inoperable bricks after sitting idle for a few weeks. He even has an unnamed Tesla service manager as proof, so the story must be true, right? The Internet being what it is these days, Twitter is full of links to various news articles and posts weighing in on the story.

To start with some basic facts, all cars will have problems develop if they sit idle. In a gasoline car the various fluids can seize the engine, at which point the engine replacement cost is expensive. Batteries, in particular, run down, and can run down to where it would damage the battery. Are we to be surprised that an electric car, if left idle for awhile, would not see a problem develop?

By the way "Brick" is technoslang for a previously operable device that's now inoperable. An example usage is "I jailbroke my iPhone and now it's bricked".

According to DeGusta, a Tesla Roadster that's simply parked and left unplugged will still drain the battery pack below a zero state of charge, at which point the battery pack is destroyed. Further, the Tesla warranty will not, according to DeGusta, cover this situation, and battery pack replacement costs upwards of $40,000. The issue is certain subsystems in the car are always "on" even if the car itself is "off," not unlike various gizmos in your house that still draw power from the wall even if the gizmo is turned off. If the Tesla Roadster is not plugged in, the power to run these always-on subsystems comes from the battery pack and, according to DeGusta, there is no protection built into the Roadster to prevent the battery pack from running all the way down and getting damaged. Supposedly this has happened to at least five Tesla Roadster owners, according to the unnamed Tesla service manager who DeGusta consulted with for the story. He also tells us that Tesla began remote monitoring of all Roadsters, and in at least one instance saw a Roadster whose battery state-of-charge was dangerously low, and being unable to contact the owner of that Roadster, turned on its GPS locator and dispatched a service team to plug the car in.

Tesla Motors, for their part, released this statement:

All automobiles require some level of owner care. For example, combustion vehicles require regular oil changes or the engine will be destroyed. Electric vehicles should be plugged in and charging when not in use for maximum performance. All batteries are subject to damage if the charge is kept at zero for long periods of time. However, Tesla avoids this problem in virtually all instances with numerous counter-measures. Tesla batteries can remain unplugged for weeks (even months), without reaching zero state of charge. Owners of Roadster 2.0 and all subsequent Tesla products can request that their vehicle alert Tesla if SOC falls to a low level. All Tesla vehicles emit various visual and audible warnings if the battery pack falls below 5 percent SOC. Tesla provides extensive maintenance recommendations as part of the customer experience.

In other words, Tesla has confirmed it's possible for the battery pack to get damaged, but that they've designed in several safeguards.

If the problem afflicts Tesla Roadsters, then what about other electric cars? Nissan issued this statement concerning the Nissan Leaf:

Globally, there are more than 22,000 LEAFs on the road that have driven more than 30 million miles, without any incidents.

This sort of issue is well known in battery design. Namely that lithium battery cells are easily damaged if their voltage falls below a low-voltage-cutoff, that is if the battery pack is discharged too far. Similarly, if the voltage goes above the high-voltage-cutoff, because it gets overcharged. Battery pack designers know this, and install battery management systems (BMS) in the battery pack. The role of the BMS is to monitor the voltage and other characteristics of each cell, control the charging process to ensure the cells are charged evenly and are not overcharged, and to safeguard against over-discharge during use. On some electric cars the BMS also operates a temperature control system to heat the battery if it gets too cold, or cool it if it gets too hot. Both Tesla and Nissan are describing behaviors of the BMS installed in the Roadster and the Leaf.

To read between the lines of these two statements, Nissan designed their battery management system to turn off the always-on subsystems if the state-of-charge goes too low, while Tesla, unfortunately, did not, though they did design in some safeguards and warnings.

And, what about the Model S? Tesla's FAQ has this to say:

If Model S is parked and not charging, will the battery lose its charge? Loss of charge at rest is minimal. For example, Model S owners can park at the airport for extended vacations without plugging in.

This leaves us uncertain whether the Model S has the same behavior as the Roadster, or whether it contains a feature to shut off the always-on systems if the state-of-charge falls too low. These battery packs are expensive and the job of the BMS is to protect against an expensive unnecessary replacement bill.

Is it good enough that Tesla Motors is remotely monitoring the batteries of the cars they've sold, and calling those whose battery pack charge falls too low telling them to plug their car in? Maybe Tesla can handle this with the fleet of 2200 Roadsters, but what if their Model S and Model X sales goes as expected and they have 10's of thousands of these cars on the road? Will they be able to scale this process up to safeguard against 10's of thousands of car owners who might or might not understand the necessity of keeping their cars plugged in?

Nicolas Zart wrote on February 23, 2012 - 12:01pm Permalink
This is great news actually as finally consumers are understanding something they've always known with their rechargeable batteries, they loose juice if you don't use them... And the same holds true (pun intended) with electric cars. The Tesla Roadster is not a garage queen. It's a drivable car. Owners need to use them regularly and get exhilarated. If you are serious about collecting cars, you also keep their batteries humming, classic or modern.
Brian Keez wrote on February 23, 2012 - 3:21pm Permalink
$40k for new batteries is an expensive lesson to learn. What I take from this is that the main problem with electric vehicles is education. Consumers just don't fully understand what they are and how they are different from a gasoline-burning car. When I buy a new car, I go through the manual. I went through my Nissan LEAF's manual twice and have a .pdf copy on my mobile devices for quick access. So I am aware of long-term storage precautions. I'm sure that Tesla will have a remedy for battery/car long-term storage in the newer models because they don't want to babysit every one of their cars when mass production and selling begins. Right Tesla?
Aleksandra wrote on February 24, 2012 - 6:38am Permalink
I could not agree more with Brian - education is the key here! Can you imagine an article criticising BMW for a desing flow resulting in engine damage when consumer fills in a diesel car's fuel tank with a regular gas? Whoever brings news to the public really needs to do their homework first.