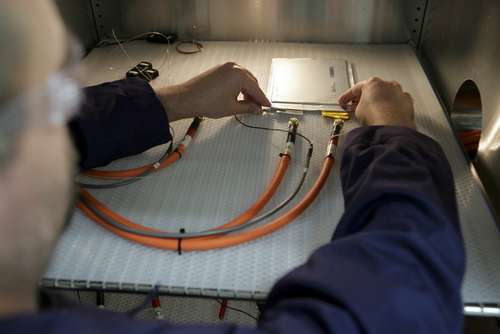 A new discovery at Ohio State University finds a cause of battery capacity degradation over time, and researchers believe this discovery could lead to better future lithium-ion batteries.
Advertisement

Researchers at The Ohio State University have found an unexpected factor of lithium-ion batteries that could play a role in performance degradation over time. The research team that lithium builds up beyond the battery electrodes, and believe that knowledge of this issue could improve the design of future lithium-ion batteries.

Lithium-ion batteries are used in hybrid, plug-in hybrid and all electric (battery electric) vehicles. They work by shuttling electrons back and forth between the anode and cathode as the battery is charged and discharged. Previously the team found that lithium builds up on the surface of anodes, causing the battery to lose charge capacity. It's widely known that batteries have a useful lifetime and degrade with each charge-discharge cycle.

The new research found that lithium migrates through the the anode to build up on the copper current collector, as well.

“We didn’t set out to find lithium in the current collector, so you could say we accidentally discovered it, and how it got there is a bit of a mystery. As far as we know, nobody has ever expected active lithium to migrate inside the current collector,” said Bharat Bhushan, Ohio Eminent Scholar and the Howard D. Winbigler Professor of Mechanical Engineering.

Researchers closely examined batteries that had been aged in collaboration with the university’s Center for Automotive Research. They used off-the-shelf lithium-ion batteries used by car manufacturers. A key to the discovery was collaboration with Gregory Downing, a research chemist at the National Institute of Standards and Technology and an expert on a technique called neutron depth profiling (NDP), a tool for impurity analysis in materials.

While this is a small percentage of lithium, it is thought to affect the electrical performance of the current collector.

Paul Scott wrote on December 16, 2012 - 8:26pm Permalink
Thanks for the depth of the information, David. It exceeded my grasp, but only barely. I feel it helps to read this kind of specificity even if you don't fully understand the mechanisms at work. Does .8% of Li have a negative effect in the Cu? Is this really the cause of the battery's degradation? Most importantly, is there a solution, and if so, what is it?
D Christian wrote on December 20, 2012 - 9:19pm Permalink
This correlation of degradation with lithium migration is a useful finding. Some further research questions: - Is the correlation causal or merely a side-effect ? - Is it affected by the following factors 1. Operation at high or low temperatures 2. Charging at high or low temperatures 3. Operations near high- or low- state-of-charge zones 4. Charging rates, especially near the high-SOC zone 5. Other environmental factors 5. Some permutations of the above factors - Application. If a causal relationship is established, could the degradation be minimized by an appropriate technical strategy? Such as BMS control software?