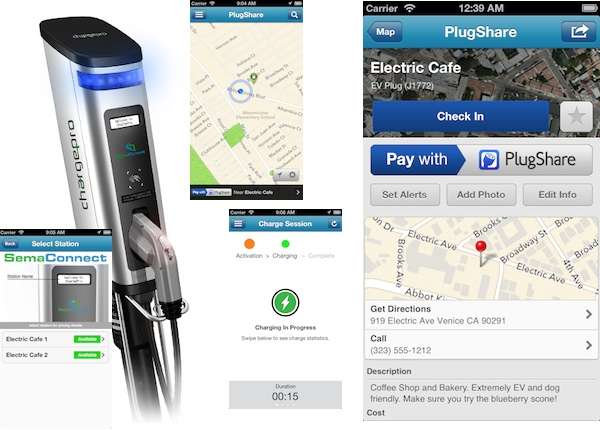 Electric car owners could have an easier time accessing public charging stations thanks to an announcement made this week by Recargo. Its PlugShare application can now be used to pay for charging sessions on SemaConnect electric charging stations. While the announcement itself is fairly small scale, the ramifications are large if Recargo is successful at forging similar agreements with other charging networks.

This capability is available today by using PlugShare at one of the 300 SemaConnect stations across the US or Canada.

The problem that Recargo is looking to solve is the current dilemma of proprietary member-only charging station networks. The J1772 charging connector is a standard implemented on every electric car on sale in America, well, except for the Tesla Model S whose drivers have to use an adapter to use J1772 charging stations. Even though it's a standard, electric car owners face a fragmented charging station market. Charging station networks routinely require a membership card in order to use one of their stations. In some cases a driver could arrive at a station on their last electron and be out of luck unable to get a charge.

"We heard from drivers and charging networks who want to make paying for charging as easy as we've made finding a place to charge. We thought if it’s possible to pay for a parking meter with a credit card, why not the same for a charging station?" said Brian Kariger, CEO of Recargo Inc. "We are pleased to launch Pay With PlugShare with SemaConnect and finally give drivers a simple solution to charging payment. Ultimately, we want the industry to thrive and our service to encourage EV adoption by providing the smoothest plug-in experience for all."

The goal is similar to two other announcements this year. The first, Collaboratev, is a company jointly launched by ChargePoint and ECOtality whose plan is to create what amounts to a payments settlements company similar to the ATM Networks. Their plan is interesting but Collaboratev's existence is deeply threatened by the bankruptcy of ECOtality. The other, Intercharge, is focusing on European charging station networks and utilizes a QR code at participating charging stations. In both those cases the model is akin to the "roaming" concept in cell phone or ATM machine usage, and even includes a roaming fee paid to the company which facilitates access to the charging station.

Recargo, the corporate parent of PlugShare, is talking with the other charging station networks to sign them up. They don't see any conflict in co-existing with Collaboratev or other payment settlement networks. Instead they see the possibility of multiple options to pay for charging sessions.