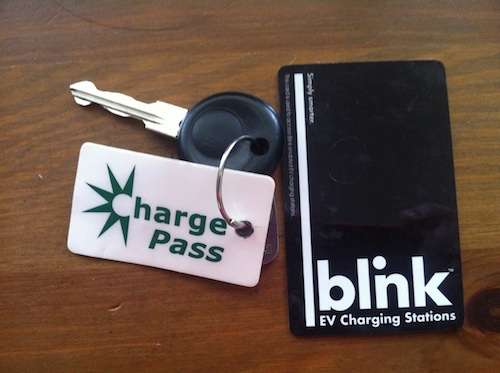 The two companies will mitigate one of the frustration points of electric car ownership, the necessity to join multiple charging station networks, by creating a sort-of roaming agreement allowing members of each network to use charging stations of the other network.
Advertisement

ECOtality and ChargePoint announced on Thursday a collaboration that will resolve a minor annoyance in electric vehicle ownership, the need to be a member in multiple charging station networks. The collaboration will allow Blink and ChargePoint network members to use charging stations belonging to either network, while in the background the companies exchange data and financial reconciliation between themselves.

Currently public electric vehicle charging services are divided into several charging station networks. ChargePoint and Blink are the two big dawgs in the field and there are other companies entering such as NRG's eVgo. Most metropolitan areas have a mix of charging station operators, forcing electric car owners to become a member of each network. Each of the networks have different membership requirements and payment strategies, which increases confusion, difficulty and cost to the consumer.

To implement the agreement, ECOtality and ChargePoint have formed a new company, Collaboratev, LLC. That company will "enable charging network interoperability, exchange session data and allow financial billing reconciliation services among electric vehicle charging networks." The jargon means that Collaboratev will provide a service similar to that which happens between banks to enable sending money from one bank to another.

Additionally Collaboratev plans to encourage other charging station network operators to join, with the vision of a allowing electric car drivers to "seamlessly charge among all affiliated charging networks." The connection between the Blink and ChargePoint networks will be implemented later this year.

“Interoperability for EV drivers is another milestone in the widespread adoption of electric vehicles,” said Pat Romano, president and CEO of ChargePoint, Inc. “Collaboratev will give EV drivers access to all stations, locations, availability and mapping features in the public domain.”

“This is a clear sign of market maturation by establishing a seamless process for EV drivers to charge across networks,” stated Ravi Brar, CEO of ECOtality. “As industry leaders, we want to ensure we are always putting the needs of our customers first. We are fostering an open ecosystem and invite others to join us in making it easy for EV drivers nationwide to get the charge they need whenever and wherever they are.”