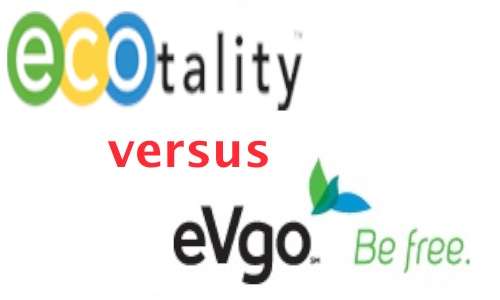 Last week ECOtality filed a lawsuit seeking to stop the settlement between the PUC and NRG that opens the door to a massive electric car charging station network to be run by eVgo in California.
Advertisement

Last Friday, ECOtality filed a lawsuit seeking to block the massive new electric car charging station network to be built by eVgo in California, as well as the legal settlement between NRG and the California Public Utility Commissions. Yesterday NRG responded with legal briefs and other documents saying essentially that ECOtality doesn't have a leg to stand on.

The settlement between NRG and the CPUC stems from the California Energy Crisis 10-12 years ago. Some subsidiaries of Dynegy, that later became owned by by NRG, had signed long term contracts negotiated by California to supply enough power to run the state. Those long term contracts were later found to have been overpriced ("gouging") and there have been negotiations underway for some time to settle the matter. Those negotiations eventually came around to having NRG build an electric car charging station network.

Legal documents filed by both the CPUC and NRG not only answer most of the allegations raised by ECOtality, but points to a number of procedural errors made by ECOtality which undermines that company's lawsuit. Namely:-

ECOtality delayed filing its lawsuit for 64 days past the date of Gov. Brown's announcement of the settlement. If, as ECOtality claims, the settlement is causing irreparable harm, then why did the company wait so long to file its lawsuit? The delay before filing the lawsuit, and that it was filed on the Friday before a 3-day weekend, undermines ECOtality's case, according to NRG. Instead, the CPUC and NRG both describe ECOtality's claims as "vague allegations of financial harm" that do not meet the standard required for a "stay of action by the Public Utilities Commission."

According to the CPUC, there was a trio of procedural errors. First, ECOtality's lawsuit failed to specify, to the Court, the precise CPUC action to stop. Second, ECOtality failed to "submit an offer of a bond" which is a statutory requirement to stay a CPUC action. Third, the CPUC notes that ECOtality asked the Court to "entangle itself in proceedings now pending before the Federal Energy Regulatory Commission" which is beyond the jurisdiction of the Court.

ECOtality's lawsuit made several allegations that boil down to describing the settlement as illegal and monopolistic. The CPUC and NRG filings answered these allegations as follows:-

Relieves NRG of paying nearly $1 billion in damages stemming from the California Energy Crisis, effectively subsidizing NRG in making a business investment in California it was probably planning to make anyway. ECOtality noted the CPUC had calculated NRG's liability in the case to be $931,042,585, however the settlement in question totaled $120 million. Of that $120 million, only $20 million was an actual fine to be paid to the state, and the rest was an investment in building infrastructure for what would become eVgo's business in California.

According to the CPUC response, a settlement between Dynegy and California was reached in June 2004 to cover claims arising from the crisis period (2000-2001). Under that settlement Dynegy paid $281 million in cash to California. The remaining liability was over the long term electricity contracts California entered into beginning in 2001. The new settlement includes a $20 million payment to California, bringing the total cash reimbursement total to over $300 million.

The remainder of the settlement is an investment by NRG in electric car charging infrastructure. The CPUC response describes this as a "non-cash in-kind component of the settlement" which, when added to the cash paid by Dynegy and NRG, totals to over $400 million contributed by Dynegy/NRG to California.

Gives NRG/eVgo exclusive access to a large number of prime locations for electric car charging stations. Neither NRG nor the CPUC directly answered this, other than to describe carefully the ownership and rights NRG will have over the infrastructure the company will build.

NRG goes on to say that ECOtality's argument is exactly backwards, and that it is ECOtality's lawsuit which is anti-competitive, because it is ECOtality which seeks to quash competition. Additionally, according to NRG, the settlement imposes reporting, contracting, hiring, and auditing requirements the company would otherwise not have to conform with, and which ECOtality does not face. Finally, NRG notes the settlement does not prohibit competitors from making the same investment, and "confers no advantage or preference for NRG."

That the PUC had no authority to make this agreement with NRG, and that earlier similar PUC agreements were struck down. ECOtality contended that the PUC's scope is limited to regulatory and planning responsibilities, in a way to maintain an open competitive market, not picking winners and losers among competing companies.

NRG's response is that ECOtality's claim has no basis, because "the Settlement raises no anti-competition or unfair business issues." Further, the CPUC determined way back in 2002 that it had the authority to settle claims arising from the California Energy Crisis, so long as the settlement does not violate state law. Therefore, because the settlement does not violate state law, and ECOtality has failed to demonstrate a state law violation, the CPUC has ample authority.

Shifts a cost burden onto electric car owners for upgrading transformer and line capacity in apartment buildings. The issue is transformer and line capacity at each Make Ready site. The settlement agreement is silent on identifying who is responsible to pay for electrical capacity upgrades at each Make Ready site, and ECOtality suggests this cost will be paid by the electric car owner whose car triggers the need for an upgrade. Neither the CPUC nor NRG responses answered this issue.

Monopoly style pricing at fast charging stations will force electric car owners to become eVgo network members. In this case ECOtality is referring to the $7 to $15 fee that will be charged to non-eVgo-members desiring to use the fast charge station at an eVgo Freedom Station. ECOtality is contending this fee is high enough, to make non-eVgo members seek to become eVgo members in order to avoid such high fees to use fast charging stations.

NRG's response notes the fee charged by eVgo is subject to "a cap and floor set to ensure that the prices paid for such use are reasonable," another restriction placed on eVgo that ECOtality does not have.

In short the CPUC and NRG response is that ECOtality's lawsuit is "manifestly deficient under the standards governing judicial stays" and has several other flaws.

Tsingshan's Threat to Tesla: EV Maker Is In Battery Crosshairs
Tesla-Funded Research Reveals One of The Biggest Mysteries of EV Battery
END_OF_DOCUMENT_TOKEN_TO_BE_REPLACED