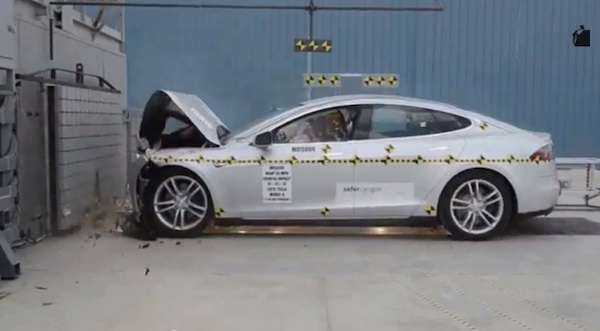 Following Tesla's claim to have built the safest car ever, the NHTSA says there are no crash test results scores above 5.4 stars, and that the Tesla Model S simply scored the maximum safety rating.
Advertisement

Tesla's claim that the Tesla Model S is the safest car ever made for good news copy a couple days ago. but the NHTSA is saying "hey wait a minute." Where Tesla Motors said they'd scored above 5 stars in crash test results, the NHTSA says that 5 stars is the maximum score.

"The agency's 5-Star Safety Ratings program is designed to provide consumers with information about the crash protection," NHTSA said in a statement. "NHTSA does not rate vehicles beyond 5 stars and does not rank or order vehicles within the star ratings."

It's rare enough for a car to get a perfect score on NHTSA's ratings, as Tesla did with the Model S. One would think that would be enough bragging rights for anybody, but on Monday Tesla claimed that "safety levels better than 5 stars are captured in the overall Vehicle Safety Score (VSS) provided to manufacturers, where the Model S achieved a new combined record of 5.4 stars."

As part of the proof for this claim, Tesla's press release cited a range of achievements during the NHTSA testing. For example, that during normal rollover testing the Model S didn't roll over, and the testers had to resort to "special means were needed to induce the car to roll." Further, in the roof crush test, the Model S roof proved to be so strong that it broke the testing machine.

While Tesla's crash test safety result is stunning, Clarence Ditlow, the director of the Center of Auto Safety cautioned us by saying "No matter what, you can't say it's the safest car ever tested, just that it had the best overall test score of any vehicle tested by NHTSA."