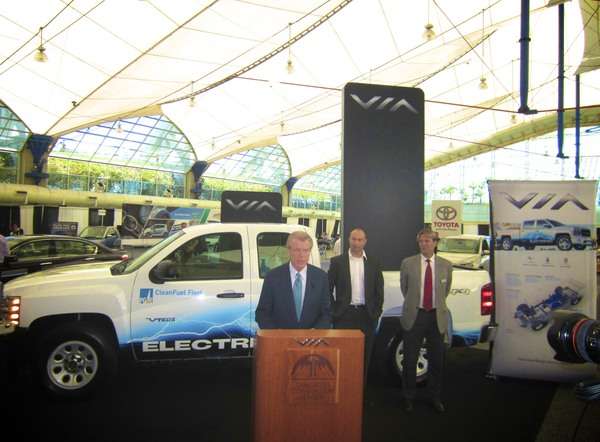 The government-supported contract aims to use Via Motors trucks, outfitted with emissions monitoring equipment, to measure improvements in fuel efficiency and emissions by using plug-in hybrid trucks.
Advertisement

Via Motors, makers of plug-in hybrid trucks and vans, has received a $20 million contract to build & deliver PHEV pick-up trucks and vans to over 50 participating fleets. Additionally the trucks will have proprietary technology on-board to record and transmit real-time data to allow the Department of Energy, to measure the fuel economy and emissions improvements.

Via Motors sources trucks and vans from General Motors and installs a plug-in hybrid drive train that offers a 40 mile electric range. Their vehicles are primarily targeted to commercial fleets, especially those scenarios requiring electricity out in the field such as construction or utility workers. That's because of a power export capability powerful enough to run power tools like arc welders.

The contract is administered by the South Coast Air Quality Management District (SCAQMD), with the Electric Power Research Institute (EPRI) acting as project manager and the California Energy Commission also participating. A part of the program is to collect data to measure fuel economy and emissions gains by using plug-in hybrid trucks. The Dept. of Energy plans collect and publish that data with the Idaho National Lab (INL) performing the data collection, analysis and publishing.

Via Motors says their design has already demonstrated the potential to reduce gas consumption and emissions by up to 80% on average in early beta testing with large fleet customers. Because of the 40 mile electric range, there are many scenarios where a worker will be able to leave the depot in the morning, travel to one or more job sites, and return at the end of the day not having burned a drop of fossil fuel. Because of the 120 kilowatt on-board generator, if that worker does need energy beyond the electricity stored in the pack, the generator is powerful enough to supply that energy, or via the power export feature, to power a whole job site.

Until now Northern California's primary electricity utility, PG&E, has been Via Motors' most visible customer. The two have worked closely together to develop trucks that PG&E can use in daily operations.

In January, the company unveiled their latest design which Bob Lutz (an adviser to the company) described as having the torque of a Monster Truck with the fuel efficiency of a Prius. Via Motors has not designed a wimpy truck. These have the power needed to haul heavy equipment with the new version being rated for over 600 kilowatts (800 horsepower).

“Plug in electric passenger vehicles are now becoming widely commercialized,” said Matt Miyasato, SCAQMD’s deputy executive officer for Science and Technology Advancement. “Expanding the commercialization of near zero-emission vehicles to include pickups and cargo vans will drive us closer to our goal of a near-zero emission transportation sector.”

“The pick-up truck is the number one selling vehicle in America and VIA Motors is the only automaker building electric light-duty pick-up trucks, cargo vans and passenger vans,” noted Alan Perriton, VIA Motors president. “The all-in cost is actually lower than driving a gas truck; this is very welcome news to budget-constrained fleets who spend more and more each year on ever-increasing gas prices, who can now save money and reduce their fleet emissions.”