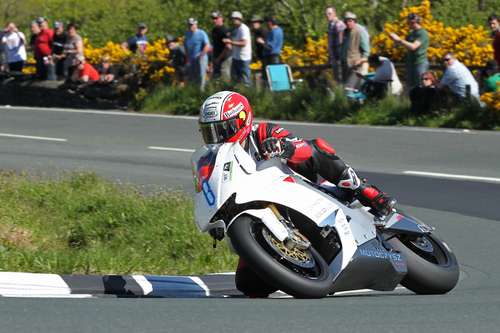 Michael Rutter, riding for MotoCzysz, beats favorite John McGuinness, Mugen, for his 3rd win in the TT ZERO, and MotoCzysz's 4th win in a row.
Advertisement

MotoCzysz snagged its fourth straight TT ZERO win on Wednesday as Mike Rutter made a dramatic come-from-behind move to win by a nose (1.67 seconds). In doing so he beat the favorite, John McGuinness riding for Mugen, after that team had reportedly spent millions of dollars in an effort to win.

The TT ZERO is a yearly electric motorcycle race, held for four years now, or five years if one counts the on the Isle of Man during the famed TT Week. The course is a 37 3/4 mile loop around the Isle of Man, climbing a 1400 foot mountain half-way through the course.

One of the big questions for the 2013 TT ZERO was whether any of the riders would surpass a 110 miles/hr lap speed. Last year, at the 2012 running of the TT ZERO, marked the first time for a 100+ miles/hr lap time in the TT ZERO.

While they came tantalizingly close to doing so, the 110 miles/hr threshold stands. During practice on Monday, John McGuinness had a 109.038 miles/hr lap speed immediately making us think that he'd surpass 110 miles/hr in the race.

On Wednesday, McGuinness started off fast with Mark Miller (MotoCzysz) hot on his tail, drafting him to save energy. At the same time Rutter was ahead of those two, but because the TT ZERO format is a time trial McGuinness led the race by as much as 9 seconds for most of the race. At the Ballaugh Bridge timing point, Mark Miller took the jump badly and broke something on his bike forcing him out of the race.

At about the 3/4ths point, Rutter hit the throttle hard for a sprint to the finish line, leaving McGuinness in his dust. By the finish line, he gained enough time to beat McGuinness by a narrow margin while missing the 110 miles/hr lap speed by 3.6 seconds.

Coming in 3rd place was Rob Barber, riding for the Buckeye Current team from The Ohio State University in their rookie appearance at the TT ZERO. He had a 90.403 miles/hr lap time.

The 110 miles/hr lap speed threshold was not broken in the 2013 TT ZERO, but it will almost certainly be broken in 2014 thanks to some yet-to-be-developed technology breakthrough.