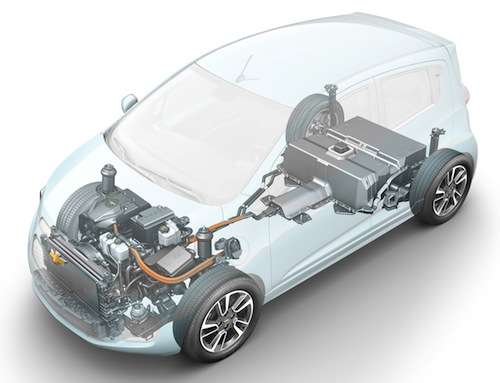 Volt: Lithium manganese spinel from LG Chem; Spark EV: lithium iron phosphate from A123 Systems. Both are supposed to be safe.
Advertisement

In October, GM announced the Chevy Spark EV would be sold in select U.S. and global markets beginning in 2013. The Chevy Volt crash testing battery pack fires have raised extra concern over battery safety. Concerns that should be allayed by remembering that the Spark EV will be built using battery technology from A123 Systems, rather than the LG Chem batteries used in the Chevy Volt.

Famously GM tested, for the Volt, a range of batteries from several vendors before settling down to a competition between A123 Systems and Compact Power (a subsidiary of LG Chem). GM chose LG Chem in part because A123 Systems at that time was a small company, unproven at large scale production. Compact Power is building a factory in Holland MI, partly with stimulus funds, to manufacture the cells which they plan to provide not just to GM for the Volt, but to Ford for the Focus EV.

LG Chem produces the cells in Korea, ships them to GM's purpose-built facility in Brownstown Township, Michigan where GM assembles the pack. The cells are thought to have a lithium manganese spinel chemistry which is thought to be safe. LG Chem issued a press release in Jan 2009, upon being selected to provide batteries for the Volt, in which they describe the cells as having a safer, manganese based, chemistry, with additives to improve lifespan, and with a ceramic coated separator that further enhances the safety of the cells. Hence, LG Chem's claim is that these cells are safe. The three fires, all of which were due to crash testing, demonstrate that something in the Volt's battery pack is flammable under the conditions triggered by the tests. The flammable portion of the Volt battery pack may, or may not be, the battery cells.

For the Spark EV, GM chose A123 Systems as the battery supplier. A123 manufactures cells with a lithium iron nanophosphate chemistry that is widely regarded to have high safety and also high power density (as proved by electric racing motorcycles as the Killacycle and the 2010 Lightning Motors race bike). A123 will not only be supplying the cells, but the whole battery packs system. Where on the Volt, GM claimed they wanted to develop in-house expertise in battery pack design and manufacture, for the Spark EV they're relying on A123 to design and manufacture the packs.

Lithium battery safety is one of the keys to electric vehicle adoption. While we do currently routinely drive cars around with tanks full of highly flammable fuels (gasoline), and while car fires are so routine they're barely reported in the news, it would be nice to leave car fires entirely in the past. Lithium metal is highly reactive and under the right conditions makes an explosive very hot flame. Certain kinds of lithium batteries have been proved in laboratory tests, and in field use, to be highly flammable, explosive even. This is true for batteries that contain pure lithium metal. Batteries made from lithium ion, where the lithium is ionically bound to other chemicals, are generally safer than pure lithium metal batteries. Both the lithium manganese spinel, and the lithium iron phosphate, chemistries are types of lithium ion battery. The safety of a given lithium ion battery depends on the specific chemical makeup. There is intense research in laboratories around the world looking for combinations of lithium with other chemicals to balance energy storage density, power delivery, reliability, lifetime, stability, cost, and non-flammability (safety).

The lithium iron phosphate is regarded as one of the safest varieties of lithium ion battery. It was originally developed by researchers at UT Austin. There were patent disputes underway between UT Austin, Hydro-Quebec (their licensee) and various companies including A123 Systems who were using this chemistry without licensing the UT Austin patents. Recently A123 Systems struck a deal with UT Austin and Hydro-Quebec to cross license certain patents so that A123 is no free of patent liability.

Bill D. wrote on December 13, 2011 - 1:36am Permalink
Excellent article. Nice to read an article that gives all the technical details and gets all those details right. I was not aware that A123Systems was supplying the pack systems, not just the cells. Smart move by GM to let the battery experts do what they do best.