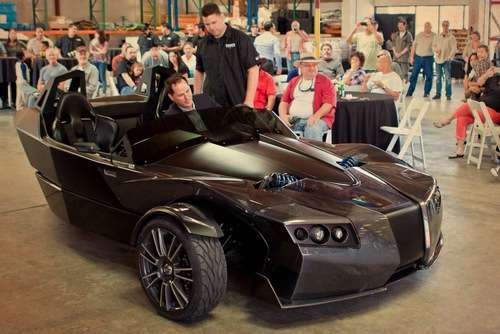 Those itching for a high performance electric car to drive on track days can find satisfaction with the newly unveiled TORQ Roadster, says the first customer.
Advertisement

Three weeks ago the hopes of Aptera fans were reawakened when EpicEV announced the TORQ Roadster three wheeler electric car. On Tuesday those hopes were raised a notch with news that Epic had delivered the first TORQ Roadster to a paying customer. The irony is that first customer was former Tesla Director of Communications David Vespremi.

The TORQ Roadster is a three wheeled open top electric vehicle. While it looks like a car, because it has three wheels it is technically a motorcycle. For details see New 3 wheeled electric sports car resurrects the Aptera dream. The price starts at $65,000 in the United States and €50,000 Europe.

“Whereas, the Tesla Roadster is a great street car that also can be driven at the track,” commented Anthony, “the TORQ is a great track vehicle, that can also be driven on the street. The difference being, the TORQ is much easier to service, repair, and configure/modify by the end user.”

Their first customer, David Vespremi, is perhaps best known for his outspoken enthusiasm for the driving dynamics of the original Tesla Roadster said: “As you can imagine, I’m very excited to be the first customer for this fantastic machine. In the U.K. and elsewhere, track-day machines like the KTM X-Bow, Ariel Atom, and others can be registered for road use and driven to and from the track or autocross on weekends. However, here in the U.S., those cars can’t legally be registered for use on public roads, so there is a pretty big lifestyle commitment involved in purchasing a tow vehicle, trailer, and all of the spares needed to enjoy the visceral experience of a track day car here. A big part of what appeals to me about the TORQ is that I can literally charge it in my garage on the same charger as our Nissan LEAF, sneak out early in the morning in a quiet electric car without the rumble of an engine waking our two young children, go for a spirited drive, and be back again without having disturbed anyone, let alone the environment, and I don’t have to own a pickup truck or trailer to do it.”

Chris Anthony told a crowded room of journalists, prospective customers, investors, and component suppliers at the unveiling: “In many ways, the TORQ EV was the car I fantasized about while building the Aptera. Whereas the Aptera was designed to be the most efficient commuter car possible, the TORQ, as its name implies, puts performance first and harnesses the amazing power delivery of an all-electric driveline mounted to featherweight platform to provide breathtaking acceleration and handling.”