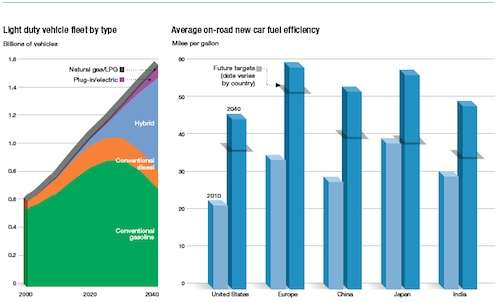 ExxonMobil predicts electrified vehicles will be mainstream by 2040

ExxonMobil predicts mainstreamed use of electrified vehicles by 2040 leads to efficiency improvements and a leveling off of emissions.
Advertisement

The 2011 edition of ExxonMobil's yearly Energy Outlook report predicts that by 2040, nearly 50 percent of light-duty-vehicles (cars) will be electrified (hybrid or electric). This mainstreaming of electrified light-duty-vehicles will result in a slight decline in fuel use, despite an increased number of these vehicles and a 25% global population increase.

The Energy Outlook report expects global population to rise by 25% to nearly 9 billion. The added people will need transportation, and the "global fleet" of personal vehicles is expected to rise to 1.6 billion. Each added person represents, macro-economically, additional demand for food, housing, transportation, energy and other resources. The report expects that by 2040 total energy demand will be 30% higher than present, largely due to the 25% population increase. While this is a significant increase in demand, the report says demand would rise even higher if it weren't for efficiency gains expected over the coming years. Efficiency gains let us collectively do the same thing while expending less energy. This not only saves us money, but reduces the negative environmental impact because reducing fuel use reduces the toxic emissions that are a side effect of fossil fuel use.

Electrified vehicles (whether hybrid, battery, super-capacitor or fuel cell) are an example of the efficiency improvements the report discusses. While the report expects the global fleet to rise to 1.6 billion vehicles "fuel" consumption (for personal vehicles) will decrease slightly by 2040. Fuel efficiency gains in "conventional" (non-electrified) vehicles will be good, but not good enough to meet changing government efficiency standards, and meeting the higher standards means electrification (hybrid or otherwise) of the vehicle fleet. Exxon is expecting the majority of these vehicles to mainly use gasoline, and have a small battery pack for an efficiency boost. Another factor will be smaller/lighter vehicles, that simply require less energy to move around. Many of the automobile manufacturers are developing concept vehicles for future transportation needs that are ultra-compact electric personal vehicles for urban use that are completely unlike anything we see on the road today.

The report describes these changes as coming about from government policies mandating a change in fuel economy and emissions output. Around the world governments ARE instituting policies calling for increased fuel efficiency. An example is the U.S. new federal regulations calling for increased fuel efficiency in both, and for the first time, in heavy-duty trucks. At the same time there are other factors that will make these changes desirable even if there were no government policy mandates.

The first is the environmental impact of "energy" use. The fossil fuels that are Exxon's bread-and-butter as a business produce many toxic chemicals as a byproduct of refining or using the fuel. Much attention is placed on CO2 emissions and the greenhouse effect, but the other chemicals cause a variety of negative health impacts. The report predicts that emissions growth is already slowing and that by 2030 will level off. The biggest factor in reducing emissions is increasing efficiency, which means getting more use out of the same quantity of fuel. In terms of automobiles, a higher miles/gallon rating means accomplishing the same driving task with less fuel consumption.

The second factor is one Exxon's report dances around and tries to say isn't really a problem. Namely, what's colloquially known as "peak oil", or the peak of oil production. The report says that "conventional crude oil" production has plateaued and will remain at about current levels through 2040. This is essentially the definition of "peak oil", which is the maximum production level for fossil oil. Peak oil educators have warned for decades that the pattern of increasing demand will cause economic problems when oil production can no longer be increased. Simple economics says that when demand exceeds supply, prices go up, and indeed oil prices have been significantly higher the last few years since the peak of production. Exxon however says not to worry, because technology will make it possible to increase oil production to meet the rising demand due to rising population.

Exxon's report does not discuss the cost of the advanced technology, but clearly it is more complicated, and more costly, than before. For example, will the price for oil remain high? If it costs more to produce the fuel because of expensive technology, then fuel prices will remain high. And in a period where global financial markets are teetering on collapse, will there be investment money available for the significant investments Exxon says are required to continue supplying fuel for the ever-increasing vehicle fleet?

ExxonMobil's vision for the future has increased energy efficiency from electrified vehicles contributing hugely to reducing the negative environmental impact. The report suggests we should stop using primary fuels and switch whole-sale to using electricity, produced from a variety of resources. It's a nice vision, if we have the global financial means to make the switch.

G Raghavan wrote on December 10, 2011 - 10:58pm Permalink
Without getting into the politics of the oil business, which often leads to the misplaced focus on the Who needs to do rather than the What needs to be done, we can all agree that (a) The Sun's limitless energy offers tremendous possibilities (b) although any transition to a solar energy regime is going to create some short-term difficulties in adjusting our lifestyles, the sooner the transition is made, the better it is for giving our children a sustainable future; and (c) the World needs to work together in containing population growth, instead of pretending that it is the responsibility of the host country to handle this on its own (which most countries are simply unable to do, for want of resources or the governance structures that make it possible. From a technical angle, the biggest problem seems to be that of energy storage, which keeps us hooked to fossil fuels that afford both portability and storage stability. It appears that quantum breakthroughs on storage of energy may not be feasible in the immediate future due to the thermodynamic barrier. However, efficiency improvements are being reported daily on various fronts. One great area which offers room for significant efficiency improvement is the concept of energy porting across time zones. The notion is still new, but the technology is understood, the scales of investment are manageable, but what is really lacking is the speed at which the old Cold War dogmas are laid to rest and a new paradigm for global cooperation evolved which permits the basic principles of common carrier responsibilities and tariffs. The other way to accelerate the transition to a sustainable energy future is raising the threshold for fossil fuel use, (or lower the threshold for solar) by means of Carbon Tax, which can fund the expenditure on the transition. And who better to make this transition possible than the present Energy majors themselves?