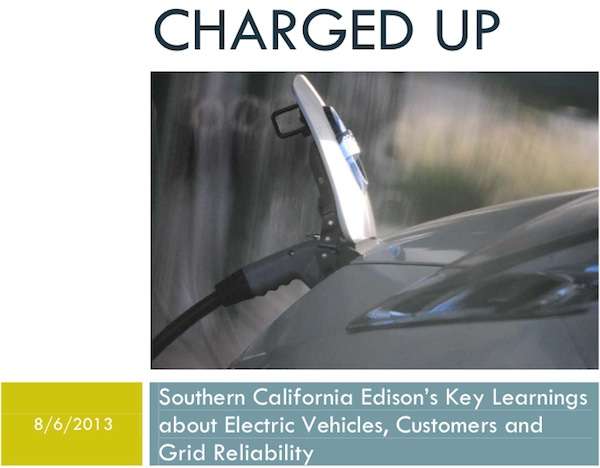 Southern California Edison released a white paper today outlining data from the 12,000 plug-in car owners in their service territory showing that the grid is capable of handling many more electric cars, that todays electric cars have enough range, and that range anxiety disappears after a couple weeks.
Advertisement

Southern California Edison, a large utility company in Southern California, has over 12,000 plug-in vehicles within its service area, representing about 10% of nation-wide plug-in hybrid and electric car sales. On Tuesday the company released a white paper today full of insights gleaned from its Electric Vehicle (EV) readiness program.

“The Southern California region and SCE’s service territory in particular is seeing significant uptick of early plug-in vehicle adoption,” said Ed Kjaer, SCE director of Transportation Electrification. “SCE is partnering with auto makers, dealers and the communities we serve to help educate our customers on ways to seamlessly connect their new EVs to an ever-changing electrical system.”

What SCE learned is boiled down to six points:

Impact on the grid from electric cars is miniscule: Of the 400 upgrades SCE made to circuits that serve owners of plug-in cars, only 1% of those upgrades were due to increased electrical demand. One of the bugaboo-fears about electric cars is they'll overload the grid, but SCE is just the latest in a string of grid operators saying there's plenty of capacity to handle electric cars.

About 65% of SCE's customers who own plug-in vehicles own a plug-in hybrid, while the other 35% own an all electric vehicle. About 50% of the plug-in hybrid owners are charging on regular 120 volt outlets rather than springing for a full charging station.

However SCE is beginning to see higher adoption of all electric cars, most of whom have more powerful 6.6 kilowatt (or more) chargers.

Using the “end charge” time programing feature is good for EV customers and their neighbors: Most electric cars can be programmed to end the charging at a specific time of day (or night). By doing this it randomizes the time when charging starts, meaning there won't be hundreds of electric cars all starting their charge cycle at midnight.

What do new plug-in car owners most want to know? Looking at traffic on SCE's website, they see the most popular areas of their website are: The Plug-In Car Rate Assistant Tool, which helps estimate charging costs; use the link to the Dept of Energy's list of public charging station locations; and watch videos on electric cars as well as reading background information on the environmental impact.

Early adopters report that electric car driving range is fine: A survey of Nissan Leaf owners shows that "range anxiety" disappeared after a period of ownership and acclimation. Most reported their overnight charging at 240 volts was sufficient to support their daily driving patterns.

SCE and the cities we serve are charged up and ready to go: Virtually all of the 180 cities in SCE’s service territory are committed to helping their residents plug in by streamlining permitting and inspection processes.

To view the white paper and accompanying materials, see bitly.com/SCEChargedUpNews.