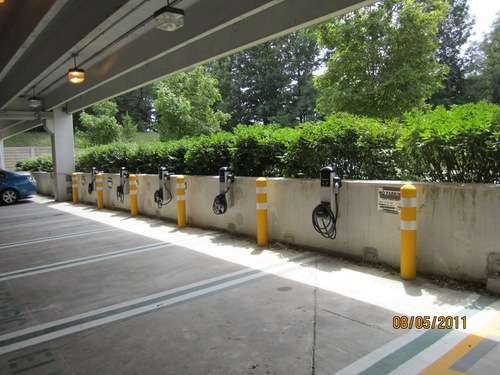 Electric car charging stations are being installed in some cities but the infrastructure is far from being sufficient to give electric car owners the same infinite range illusion currently enjoyed by gas car owners.

In fact, this situation is not new because the first program of charging station installation did not happen in 2011 but in the late 1990's with California's first wave of electric cars. Those charging stations are still installed in some places and for years have gone under-utilized and some of the braver gasoline car owners brazenly parking there despite the signage saying "Electric Car Parking". This condition is known as "ICE-d" because electric car parking is blocked by an internal combustion engine (ICE) vehicle. ICE'd electric car parking prevents the electric car owner from recharging, causing frustration to that car owner, and perhaps threatening their successful return home if they'd counted on charging in that parking lot.

Today laws exist in some locales making it a crime for a car to be parked in a posted electric car charging spot, but not plugged in to a charging station. Such cars can be towed away so that these parking spots remain open.

Maybe electric car charging stations should operate like gasoline stations, the EV owner would drive in, fill up the battery, then drive away. Unfortunately this isn't possible, yet, because EV charging is not a five minute or less operation. Yet. Maybe in a few years fast charging EV's will be more common and we could have EV filling stations just like today's gasoline stations. In the meantime it means EV charging stations have to be positioned in places where it's convenient to park for a couple hours.

For example at workplaces where you're inside for 8 hours, you won't notice the 3-4 hours it takes to recharge the car because you're inside with your nose to the grindstone. Shopping centers are another likely place and are useful even if you're only popping in for a half hour or less of parking. This is called "opportunity charging" meaning to take whatever opportunities that arise to charge. While an opportunity charge isn't a full recharge it can add a few miles range.

Business owners know that the longer a person spends inside a store, that they're likely to spend more. A business might offer free EV charging as an incentive to bring customers, ones who will be incentivized to spend more time in the store because their car is charging outside.

Frank Sherosky wrote on January 22, 2012 - 8:24pm Permalink
EV owners are going to have realize the free lunch of taxpayer subsides will end one day. Likewise, they too will have to realize they need to pay their fair share for their electricity like the rest of us. In addition, they should pay higher registration fees to cover their use of the roads, since they do not pay gasoline tax to maintain them. The internet heads thought the web was free too, until they realized they required big business for growth and advertising revenues to support their business plans. So, this expectation that electricity is somehow free is ludicrous, even when wind and solar sources are used. Somebody has to maintain its feed to the grid. Those who provide the power and the access to the electrons deserve to get paid; fairly, but paid nonetheless.