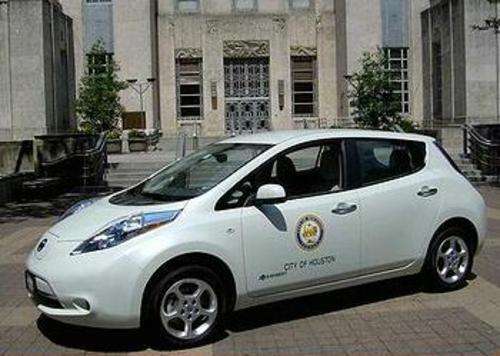 The Oil Capital of the World, Houston, is launching a car sharing network for municipal employees, in partnership with Zipcar, including 25 Nissan Leafs in in the car sharing fleet.
Advertisement

Houston, as effectively the capital of the Oil Industry, might seem the last place to see electric cars. However that city has had quite a build-out of electric vehicle infrastructure, and now the Houston city government is adding electric cars to the municipal car fleet. Houston and Zipcar have launched the first municipal electric vehicle (EV) fleet sharing program, called Houston Fleet Share, starting with 50 vehicles, 25 of which are Nissan Leaf's.

The new vehicles will be outfitted with Zipcar's FastFleet proprietary fleet sharing technology, and will be used by city employees. By using the FastFleet platform in these, and other, vehicles City employees will have vehicle access in the style of Zipcar's self-service online reservation and secure vehicle access system. The program is expected to help the City improve efficiency, improve vehicle utilization and reduce costs, while reducing the environmental impact of the City fleet.

"Houston is setting the pace for sustainability efforts, and we are very proud to be working with Zipcar to launch the nation's first-ever municipal EV green fleet sharing program," said Mayor Annise Parker. "Although we've always been known as the oil capital of the world, we're gaining momentum on being the energy capital through programs like Houston Fleet Share and the Houston Drives Electric initiative."

By working with ZipCar's FastFleet technology Houston will have increased flexibility in configuring the fleet for better utilization, while managing events like preventive maintenance, fueling, billing, and fleet distribution. It also gives the city tools for analyzing usage and diagnostic data, automatically captured during every trip, and analytics reporting of usage trends to better control of its fleet.

Zipcar's FastFleet technology brings the Zipcar car sharing model to fleet operators, making reserving and driving a vehicle seamless for employees. It has already been adopted in similar programs in Washington, D.C., Chicago and Boston. In Washington DC the city was able to eliminate cars, save money and reduce emissions. Estimates in that city are $1 million in savings per year.

"I would like to applaud Mayor Parker and the City of Houston for all the work they have done to make the city's municipal fleet one of the most sustainable in the country through their dedication to EVs and hybrid vehicles. We're excited to help make this program even more efficient with the addition of Zipcar technology into these vehicles," said Scott Griffith, Zipcar chairman and CEO. "By utilizing Zipcar's FastFleet technology through the new Fleet Share program, the City of Houston joins smart city governments focused on developing solutions to complex transportation challenges."