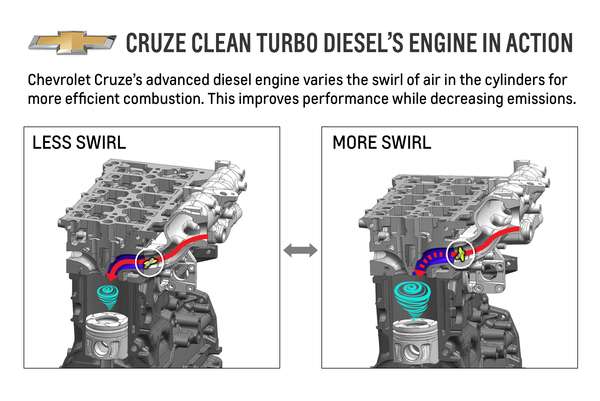 The new generation of turbo-charged clean diesels, like the Cruze Turbo Diesel, are cleaner and more fuel efficient than ever.
Advertisement

Because the variable-swirl system improves emissions, GM is calling it "Clean Diesel." "Variable swirl helps put the 'clean' in Cruze Clean Turbo Diesel. It increases the mixture-motion of air and fuel in low-speed, low-load driving, like when you're doing the commuter crawl to work every day," said Mike Siegrist, 2.0L turbo diesel assistant chief engineer. "It contributes to Cruze Diesel's great fuel economy, and helps give drivers the most torque for the least amount of fuel at the lowest emission and noise levels."

In the variable-swirl intake manifold, each cylinder has two separate intake ports, one of which is controlled by a valve. Each throttle valve varies the size of its opening, creating a mixture-motion of air and fuel within the cylinders. Extensive research went into calibrating the actuators to precisely open and close the valves for optimal performance.

This and other powertrain technology advances enables the Chevy Cruze Diesel to offers a segment-leading EPA-estimated 46 mpg highway and range of more than 700 miles per tank. That's better than any other non-hybrid or gasoline powered vehicle available for sale in North America.

This is not your old-skool dirty diesel either. The Chevy Cruze diesel engine is the cleanest ever manufactured by GM. Generally speaking clean diesel engines produce 90% less NOx and 90% less particulate emissions than previous generation diesels. Particulate emissions in particular are known to be a primary culprit in greenhouse gas climate change concerns, and are also a known culprit in cardiovascular diseases. The clean diesel engines largely eliminate those concerns, and additionally the emissions of the Chevy Cruze Clean Turbo Diesel will meet U.S. Environmental Protection Agency's (EPA) stringent Tier 2 Bin 5 emissions standards.

"All combustion engines have swirl, but having variable swirl is a real difference maker for Cruze's diesel engine," Siegrist said. "Ultimately, it means more driving satisfaction with less environmental impact."

LG's New EV Battery Plant Is a Welcome News for Tesla
Tesla Giga Berlin's New Hurdle: It's Not Only the Gov't, but Now Tesla Itself
END_OF_DOCUMENT_TOKEN_TO_BE_REPLACED