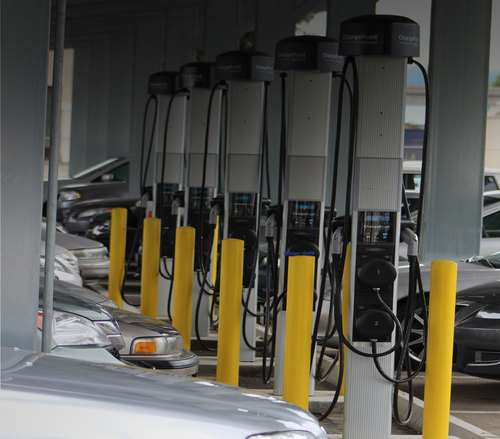 Two companies offering electric car charging services via the ChargePoint network are merging, in what may be consolidation.
Advertisement

CarCharging Group is proposing to acquire EV Pass in a sign of what may be consolidation in the electric car charging network market. Both companies operate electric car charging station networks running on top of the ChargePoint network. The acquisition of EV Pass will give Car Charging Group access to "destination" locations in Central New York such as shopping malls and universities.

EV Pass, in partnership with New York State Energy Research and Development Authority (“NYSERDA”), is operating the Central New York Destination Location Network (“CNY Network”). The CNY Network is a wide area transportation plan based on the concept of electric car charging services located “where the car wants to go, not where it lives.”

These destination locations are comprised of: New York shopping malls, including DestinyUSA; higher education institutions such as SUNY-ESF and Syracuse University; entertainment venues such as the JFK Arena in Rome, NY and the Oncenter Convention Center in Syracuse, NY; and 39 downtown commuter parking locations in Syracuse, NY.

Additionally EV Pass was in the process of being awarded a NYSERDA grant to administer charging stations throughout Upstate New York.

CarCharging Group will take over these operations as part of the acquisition of EV Pass. Eckardt C. Beck, the Executive Director of Synapse Sustainability Trust, will join CarCharging’s Board of Directors.

“I look forward to helping CarCharging to carry out its mission to enable EV owners to charge their cars anytime, anywhere and to sharply reduce the amount of CO2 put into the earth’s atmosphere,” said Eckardt C. Beck.

CarCharging Group has a nationwide network of electric car charging stations, and more than 50 strategic partnerships across various business sectors. In late February, CarCharging announced they had finished the acquisition of Beam Charging, LLC, who provides EV charging services in New York City.

“Bottom line, EV sales are growing. EV sales in January 2013 were more than 300% greater than January 2012, and EV sales in February 2013 were nearly 330% greater than February 2012. To support the increasing EV market, it is our intent to expand our EV charging infrastructure through organic growth and acquisitions of other EV service providers,” said Michael D. Farkas, CEO of CarCharging. “With our recent acquisition of Beam Charging and the pending acquisition of the CNY Network, CarCharging will expand its footprint throughout New York State and gain additional strategic property partners.”